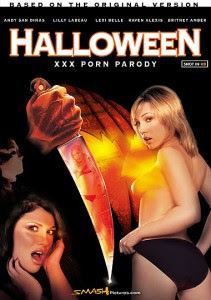 I had a really hard time deciding which one of these horror-porn parodies was worse. Zero Tolerance's Official Halloween Parody was horrible but offered up some real good laughs by Dr. Loomis character played by James Bartholet (Saw : A Hardcore Parody) but Smash Pictures released a movie that is much more true to the classic 1978 John Carpenter's Halloween. All of the main focal points of the original movie are thrown into this one and are of course surrounded with hardcore sex scenes.

The girls are also better looking in this version but the acting is as bad as can be. The character of Dr. Loomis is fucking horrible and had me praying for the laughs from James Bartholet. Another thing that caught my eye was how bruised up all the girls were in the Smash Pictures version.

Laurie is the shy goodie-girl that we know and love in the original and all of her friends think she is a virgin but in reality she is quite the freak. She sits home and masturbated to masked madmen in shitty horror movies. Her fetish fails to be true when Michael Myers is chasing her around the house with a kitchen knife. Myers does get some pussy in this one and he does it in true Jewish fashion, Through a sheet of course. "Can I get your ghost Bob".

This horror-porno-parody offers up memorable quotes from the original, really obnoxious screaming, a throat slashing, stabbings, a sewing needle to the neck, coat hanger to the eye, shootings, strangulation, shitty camera work and black & blue'd porno-sluts. If I had to chose I would say this is the better of the two. Its still ridiculous, offensive and lacks in creativity but what do you expect from a mindless, money-hungry industry?

I would assume that Smash Pictures has broken down the boundaries of pride yet again that all forms of self respect has gone out the window and we can expect more then one remake of the same movie every year.

Only worth a watch if you can't find anything better to do with your time. Unless of course you have some kind of weird fetish for light skin girls with dark bruises.