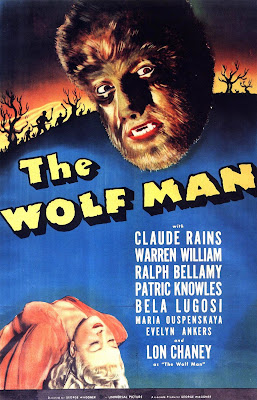 Ten years after Universals classic monster movies Dracula and Frankenstein the studio slams out another timeless classic. Lon Chaney Jr. plays Larry Talbot who is bitten by Bela Lugosi and transforms into a Werewolf on the next full moon and terrorize the neighborhood. 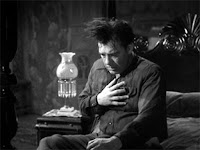 The Wolf Man isn't the first Werewolf movie but it certainly is the most important Werewolf flick ever made. Lon Chaney is emotionally torn and questions his sanity. Nobody believes that he is a monster and he fears the next full moon.

Claude (The Invisible Man) Rains plays Chaney's father and although it isn't very convincing that these two iconic actors are actually father and son, we get an excellent performance from both. In the following year Rains would go on to do Casablanca which he is remembered for by most but for me it is these Universal Pictures that I will always identify him with.

There are certain things that seem a bit silly by today's standards. For instance a Werewolf sees a pentagram in the palm of his next victims hand. Naturally it appears in the palm of loved ones. We also have a scene where Bela Lugosi is transformed into a wolf and Chaney kills him with a silver plated cane. When the authorities get to the scene of the crime and Lugosi is laying cold and dead he has his clothes on except for his shoes. The wolf clearly wasn't wearing any clothes so my question is, who was dressing Lugosi's dead body? The Wolf Man also chooses to strangle victims rather them maul them with teeth which I always found a bit funny but then again these minor continuity problems just add the the fun of these old monster movies. 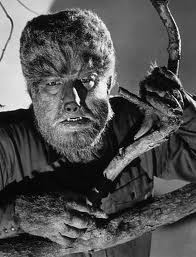