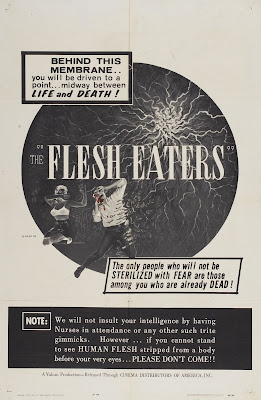 By the title, you would probably guess this is a zombie movie but by the release date you would have to quickly discard that idea. Night Of The Living Dead wouldn't hit the screen for another four years and that is fine because The Flesh Eaters is not a zombie flick at all.

Two pretty girls are stranded on a island with a macho pilot. They are greeted by a mad-Nazi scientist and a skeleton that washed ashore. It turns out that there are flesh eating parasites in the water. They rip every bit of flesh from the body, leaving nothing but bone.

Of course our Nazi scientist is to blame and the creator of these nasty creatures and its not long before these things mutate into a giant man eating monster.

The story is silly and full of plot holes but the movie itself is awesome. For 1964 this thing is pretty goddamn gory. In one of the goriest moments a Flesh-Eater gets into a mans leg and as the blood gushes out, help arrives to stick a knife into the wound and dig the little sucker out. We also get a shooting, a brutal stabbing and a really disgusting suicide with a bullet to the achy-breaky skull, complete with falling out eyeballs. Some of the other highlights consist of dissolving stomach's, complete with guts spilling out. Flesh pealing away and some really silly special effect where it looks like they scratched the film negative for added weirdness. Our sex appeal comes in the form of a blond who rips her shirt off to mend a wound. Luckily for us she spends most of her remaining screen time in her bra or in a bikini.

This is one of my all time favorite black and white 60's horror flicks. Its right there in the same vein as The Horror Of Party Beach which would come out the same year. Its really to bad more people haven't seen this thing because I feel it's cult status should be much higher. Flesh Eaters is fun all the way through and never gets boring. The story on the other hand is a mess, as is the day for night and night for day shots. The time continuity is so bad that you don't even know how long they have been stranded. Has it been one day or seven? Who the hell knows... Then we have a ridiculous climax in which our tough-guy hero learns that human blood shot directly into the nucleus of the monster will kill it. So he makes a gigantic syringe and they all take turns drawing blood and we have a final battle between the monster and our hero. Why would human blood kill something that is called a Flesh Eater?

Despite the obvious flaws in this campy B-movie from Mars, the ineptitude isn't the main point of interest here. Its the fast paced gory mayhem that really holds the interest. A must see for lovers of oldie B-Movies and gore-hounds alike. 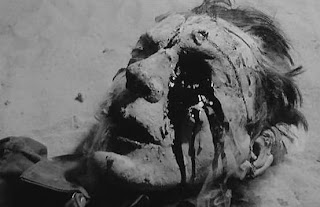