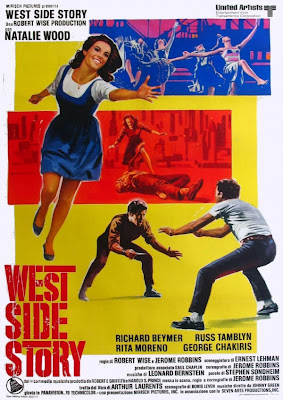 West Side Story might be the silliest juvenile delinquent picture ever made. The story is a serious commentary on the problems of racism in this country and the affect it has on the youth but due to the fact that its a musical (and probably the greatest musical of all time) its filled with dancing, singing and of course crazy spinning and twirling. 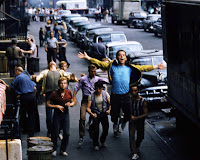 Its a little hard to take these rough and tough street kids seriously when they jump ten feet into the air and do a sort of spinning split but for me that's what makes West Side Story so much fun.

The truth is that West Side Story is a pretty sad movie and you really can get sucked into the story of two lovers torn apart by a race war. Which is why West Side Story is the perfect flick to watch with your best girl but its still nice to sit back with a few friends and some drinks while getting some cheap laughs out of the dance numbers. 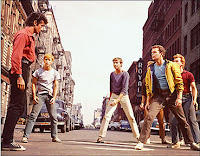 Although West Side Story is a sort of modern adaption of Romeo And Juliet looking at it today there are certain things that make it a bit hypocritical. For instance the movie tells of two gangs in NYC. One being a all white gang called The Jets and the other being a Puerto Rican gang called The Sharks. The two gangs are at war and believe segregation is the only way. In a scene at a dance hall which is supposed to be nutural territory The Jets and The Sharks taunt each other with some silly dance routines but for a movie that is making a statement against racism it doesn't come off politically correct. If you look in the background all of the black people are just kind of standing around. They are the only ones who are not dancing and we all know that black people have much more rhythm then white people. Al Sharpton would have a field day with that scene but I just found it interesting in a nostalgic kind of way.

Another thing that comes off a bit weird while watching it today is the fact that the movie never really gives a date to the location. Since it was released in 1961 and the whole duck-tail, greaser true juvenile delinquent films were done and over with the dress code seems a bit out of place and doesn't quite go with the attitude of the street kids.

Russ Tamblyn who would go on to do some sleazies like The Female Bunch, Satan's Sadists and Dracula Vs. Frankenstein plays the leader of The Jets. Its strange to think that a man who did a film that won so many Oscars would go on to work with the likes of Al Adamson. I guess an actor will do a lot of things when hes hungry for work and anything beats a nine to fiver. Whatever Tamblyn's reasoning, I'm glad he got back to the drive-in.

The trailer on my dvd states "Unlike other classics West Side Story grows younger." I don't know if I can totally agree with that but the subject is still relevant today and its a lot of fun to watch. 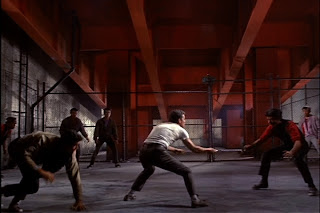