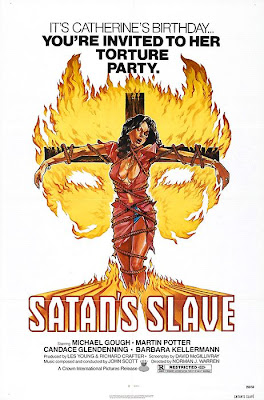 Lots of gore on display in this one. We also get nudity and some Satanism for added fun but unfortunately this thing takes to long to get going and the first half of the movie is very boring.

Satan's Slave also known as Evil Heritage tells the tale of Catherine who takes a road trip or as they say in England, a holiday to her uncle Alexanders (Michael Gough) house in the country side. She has never met her uncle or her cousin and she was better off that way because her relatives are part of a satanic cult and plan on sacrificing Catherine on her 20th birthday to resurrect a priestess named Camilla.

For me the story is generic and lame but there is some value to this British piece of trash. The value of course lay within the senseless violence and gory mayhem that seems to come out of nowhere. The naked ladies doesn't hurt either and we get a decent amount of that as well. If only the movie could hold an interesting pace Satan's Slave would probably have a huge cult following.

In one of the films finest moments in all of its gory awkwardness a possessed man jumps from a tall building leaving brain matter in the street from his achy-breaky skull. Naturally the viewer thinks he is dead... that is until he tries to drag his mangled body away. It makes no sense but there is tons of red stuff. Satan's Slave's nastiest scene shows (in gory detail) a man being stabbed in the eye. A girl has her face pushed through a mirror. Then she is stabbed with the shards of broken glass. Then she is stabbed through the mouth with a kitchen knife and is left hanging off a door in true Michael Myers, Halloween fashion. A married couple is killed in a crash and burn car accident, another girl is stabbed to death, another has her achy-breaky skull smashed in a door and is then stabbed.

We also have an attempted rape scene that ends with some bitch-slapping. We get some cheesy pentagram-fu and an upside down crucifix is shoved between a women's legs in a typical 70's horror, sacrificial scene. We get a bit of incest and a naked girl covered in snakes, Another is striped, whipped and burned at the stake.

With a track record like that, I wish I loved this movie but it really is nothing more then a bad movie which happens to be a great time passer. Watch for the gore and sleaze factor and you might even find yourself into it by the films final reel. This thing was directed by the same cat who did Bloody New Year which might give you an idea on the weird pacing and awkward tone that runs throughout.