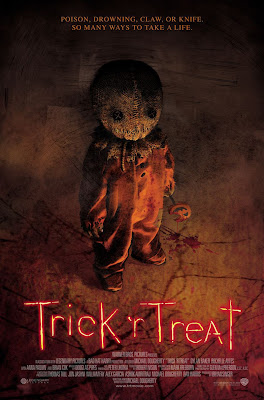 Every generation needs a good Halloween anthology horror movie. For me growing up it was Creepshow and I still love it to this day. Personally not being a big fan of modern cinema I was pretty surprised with how much I liked this one and I am happy that younger kids have at least one movie to celebrate the season with.

This one offers up a child killer, a little bit of nudity and some red stuff but its done in a totally campy sort of way that isn't or at least shouldn't be taken serious. For this reason, I was surprised that the movie is rated R. If this thing came out in the 80's it surely would have a PG13. I guess tits in celluloid these days is an automatic R. Too bad because Trick 'R Treat is a total kids movie.

The stories all play together in a sort of Quentin Tarantino kind of way with no real importance on the chronological order. When its all finished, it works quite well. The kiddie killer sort of looks like Jeffrey Combs from Re-Animator with his white shirt and tie and his nerdy glasses but instead of bringing the dead back to life he poisons the candy of little brats and chops their heads off. Now that's the Halloween spirit! We also have a "Halloween school bus massacre" in which a greedy old man drove his bus full of retards off of a cliff, into a lake.

We get our sex appeal from a werewolf story, with a bunch of sexy lycanthrope bitches, who put the werewolf orgy in The Howling 2 : Your Sister Is A Werewolf to shame. These babes offer up some bare breasts and then rip their flesh off exposing the wolf underneath. I guess you can call them a wolf in a babes clothing... The special effects look pretty good in this scene but unfortunately Marilyn Manson is playing on the soundtrack. Next we get some zombie action with yet again some child killing, complete with gut munching. We have a slasher type story that offers up the most gore complete with Achilles tendon slashing, nasty glass wounds to the hand and a dead dog. We have a monster with a pumpkin-head (complete with shotgun wound and drippy mess). Theres also a vampire running around and the whole thing is just a fun ride of Halloween mayhem.

Skip Monster Squad this year and check out Trick 'R Treat. You're never to old for a fun Halloween horror flick. 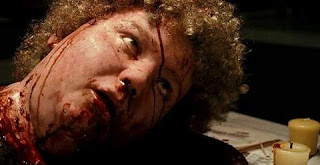