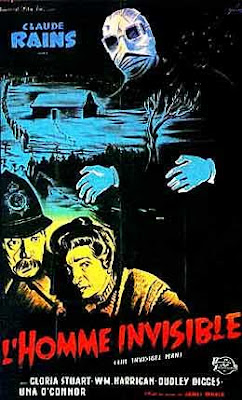 Two years after the classic Boris Karloff Frankenstein and two years before its sequel Bride Of Frankenstein, the genius horror director James Whale gives us The Invisible Man, starring Claude Rains in his signature role as the mad scientist who's bandages conceal his invisible identity. 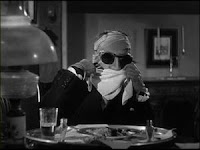 Although Rains only did one film before The Invisible Man and his acting skills weren't much to be desired, his voice on the other hand was. Rains was carefully selected for this role due to his distinct voice that couldn't be duplicated. Where Vincent Price who stared in The Invisible Man Returns would later be remembered for the same reason, Rains unique vocals were due to a tragic attack in World War I when he was subjected to a poison gas, that left him blind in one eye and forever altered his voice. Oddly enough Rains had a speech impediment through the younger years of his life. The fact that he could not pronounce the letter R in a sentence properly and a thick Cockney accent on top of it, its amazing that the stage actor would become famous for the very thing that stood in his way through his youth.

Casted along Claude Rains is James Whale favorite Una O'connor who I remember best as the shrieking old hag in Bride Of Frankenstein. She goes about the same obnoxious routine in this one and I usually hold my ears while she is present on the screen but we do have the privilege of watching Una being hit with pint glasses in a surprisingly violent and satisfying scene. To bad nobody broke a bottle over her head in The Bride Of Frankenstein... John Carradine also shows up for a cameo as a street moron who wastes the police time with idiotic phone calls. We also have a police officer who strikes an incredible resemblance to the guard in A Clockwork Orange but of course it is not the same actor.  We also get Gloria Stuart from James Whales The Old Dark House and would go on to do the crap-tastic 90's blockbuster hit Titanic as The Invisible Man's girlfriend. H.G. Wells is the genius behind the story but Universal Studios took the film into a much darker territory with madness and murder. 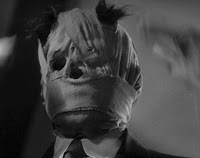 The Invisible Man tells the tale of a scientist (Claude Rains) who comes up with a concoction of drugs that turn living beings invisible once injected under the skin. There is only two problems. The first being that Rains is using himself as a guinea pig and the second being that one of the drugs is "Monocaine" which strips the color away from any subject but also has a negative side affect. It has been known to cause insanity. Well Rains most certainly is stripped of color and he also goes very violent. Overwhelmed with thoughts of power and control The Invisible Man becomes a murderer "We'll begin with a reign of terror, a few murders here and there, murders of great men, murders of little men, just to show we make no distinction" but how do the police catch a man they can not see?

The Invisible Man blends humor and horror better then most. It also offers up amazing special effects of the time and the film holds up even today. The effects look better in this 1933 picture then they did in Hallow Man with Kevin Bacon, that's for sure. The film also offers up some achy-breaky skulls (complete with text books to the head and bodies being thrown down stairs) We get some invisible bike riding, invisible bank robbing, One dead cop who has a bench smashed into his achy-breaky skull, death by car off the edge of the cliff (complete with crash and burn). gun violence, invisible slap-stick ass-kicking, and apparently The Invisible Man doesn't wear any underwear. Check it out for one of the best in the Universal Studio's classic horror collection. 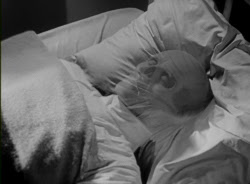