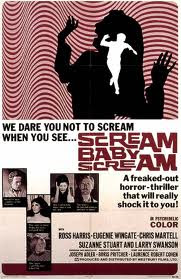 Larry Cohen's name is a pretty popular one amongst cult fans. Remembered for his trashy horror films like God Told Me To and the Its Alive trilogy and of course his blaxploitation flicks like Black Caesar and its sequel Hell Up In Harlem, staring Fred Williamson. but before he was directing he was writing. Scream Baby Scream is amongst his early writings but was unfortunately directed by a nobody.

Scream Baby Scream also known as Nightmare House revolves around four hippies who enjoy the finer things in life, like dropping acid and going to the zoo or painting nude models. They drive motorcycles and go to hippie-delic rock & roll shows complete with go-go dancing and some really silly outfits. These hippies are in for a bad trip when they meet an artist who gets his motivation for his morbid paintings from real life victims. He kidnaps the better looking of the girls in the hippie foursome and slices into her face with some surgical tools leaving her disfigured. The girls boyfriend eventually catches on to the foul play and takes matters into his own hands. That is until he sees her face..

This one is virtually gore-less with the exception of the Grotesque-style mangled faces. There is unfortunately no nudity to be found either which is a disappointment from a film of this nature. The acid scenes are really cool though. We get weird texts that flash across the screen as the hippies swing from bars inside cages. This one is worth a watch for its level of camp alone but the truth is it's not a very good movie. I can only recommend this one to lovers of bad movies and fans of weird psychedelic trip-out movies from the 60's. 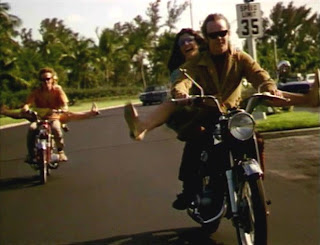