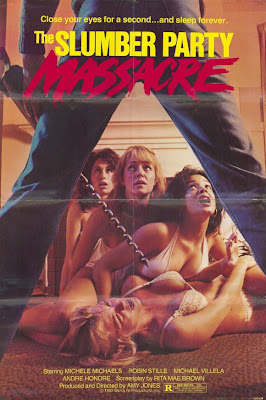 Typical 80's Slasher with a really memorable killer but not much gore to offer. Surprisingly enough there really isn't a lot of nudity here either, with the exception of a quickie high school shower scene in the beginning a little bit of tit groping in a car.

With a title like Slumber Party Massacre one would expect tons of nudity and rivers of red stuff. Despite the lack of the two slasher essentials, somehow Slumber Party Massacre still entertains. Personally I feel it is mainly due to the unforgettable killer who runs around with a giant drill and has his way with high school kids. In what is probably the most memorable scene, he kills the pizza delivery guy with a drill-bit to the eyes. The funny thing is that this is the most memorable death but it happens off screen. We just get to see the eyeless body fall into a room. Later one of the dumb bimbo's will eat a slice of the pizza. I really shouldn't call the females dumb in this movie because they have more survival instinct than the average scream queen in a 80's Slasher. This is probably because the film was written by a feminist. Yes, I know... its almost impossible to believe that a feminist would chose The Slumber Party Massacre or even consider it as a project but it is a fact.

Don't worry, the message doesn't come across and it plays like every other Slasher from this time period, with dead bodies falling out of refrigerators and cats jumping out of closets for the jump scares. Scream Queen Brink Stevens (Sorority Babes In Slimeball Bowl-O-Rama) shows up here in one of her earliest films along with Robin Stille who plays Valerie, who is the best looking in the film.

While Driller Killer will always be my first pick for a drill wielding maniac Slumber Party Massacre is still a fun time passer. The average slasher fan shouldn't be overly disappointed unless of course if they were looking for tons of nudity. So tell your friends to bring their pajamas and stay up late with this silly slasher for some death by drill. 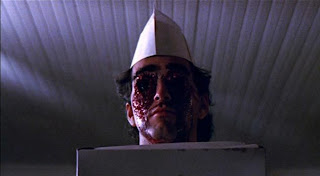