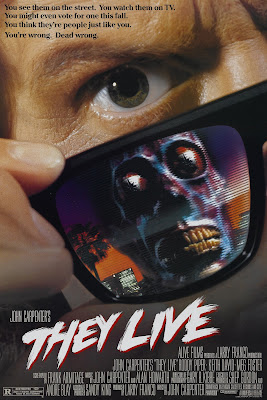 John Carpenter redeems himself with this 1988 politically charged sci-fi. horror flick. Around this time Carpenters work seemed to be getting softer and softer and while They Live isn't quite as relentless as Halloween or gory as The Thing it makes up for it with its unique expression on American consumerism and mind control. 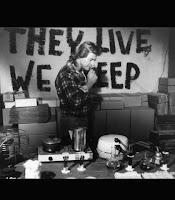 Former wrestler Roddy Piper and Keith David who I remember best as Childs in The Thing learn that planet earth has been dominated by aliens who appear to be human but with the help of a revolutionary group and a new invention (sun glasses) that can expose the ugly, aliens for what they really are, they wage war.

For me this movie is really lame as far as a horror flick goes but as a political art flick its great. Consume, Obey, Watch T.V., Reproduce, Have children, Stay asleep, Respect authority and many other slogans are plastered all over billboards and signs. The general public can't see these signs because they are subliminal but once the special sun glasses are worn everything is as clear as day. For example a dollar bill will appear to be normal without the glasses but when worn the money says "This is your god".

There is a moment in the film where a news reporter brings up the violence in movies and George A. Romero and John Carpenter's names are both mentioned. I found this to be funny because I personally feel that Carpenter was trying to go the George Romero route with this one but where Romero's political commentary is subtle Carpenter went all out and straight for the throat. For this reason They Live worked and all the conspiracy theory losers should get a kick out of it as well as anyone who is generally pissed off and feels controlled and oppressed by the media, authorities and social status of their boring daily lives. Sci-fi nerds can dig on this one as well cause we do get some cool looking aliens. They Live also offers up some dead cops, a really over the top and completely ridiculous fight scene that just never seems to end. Silly one liners "I'm here to chew bubble gum and kick ass... I'm all out of bubblegum.", We get some bare breasts in a inter-species sex scene, dead yuppies, dead bums and a bunch of shoot-em-up scenes. The biggest downfall of the movie for me is the awful soundtrack and the poor pace that eats away at the later part of the movie.

Not as good as Carpenters early work but still a good watch and a nice come back for the director. 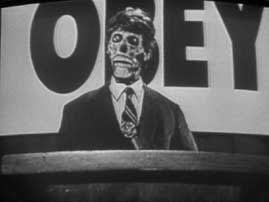 Email ThisBlogThis!Share to TwitterShare to FacebookShare to Pinterest
Labels: Monster Movies, They Live