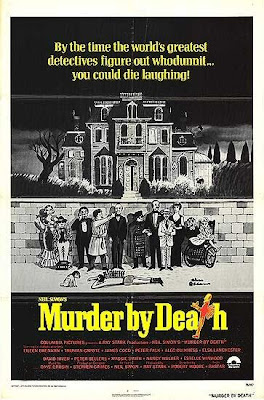 Personally not being the biggest fan of comedies I was really surprised at how much I liked this one. Perhaps because it mixed in elements of horror and mystery in a very comedic way. I'm sure that seeing for the first time in a theater helped too.

Five detectives are invited to a "Diner and a murder party" at a creepy old mansion. A sum of money is offered to the first detective who can solve the murder that takes place at midnight. The only catch is that the murder is going to be for real and the victim will be one of the detectives.

Booby-traps await around every corner and the goofy detectives are caught in a game of cat and mouse. We get some truly funny moments especially from the Asian detective and his son. Although this mid 70's flick would be considered completely politically incorrect today I found it to be funny as hell. Peter Falk shows up as one of the detectives that is clearly spoofing on the Sam character of Casablanca. Falk is the gun-wielding tough guy who naturally turns out to be a homosexual in the end. Then we get a creepy blind butler and a deaf/mute maid. The characters, dialogue and of course insane story really help this one  move along at a nice pace. It never gets boring and delivers quite a few laughs. 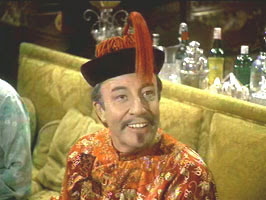 Email ThisBlogThis!Share to TwitterShare to FacebookShare to Pinterest
Labels: Murder By Death, Mystery