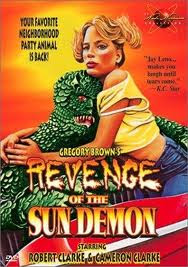 Revenge Of The Sun Demon also known as Whats Up, Hideous Sun Demon is not a sequel to the 1959 Robert Clarke monster movie The Hideous Sun Demon. What it is, is a reedited and re-dubbed version of the original. Obviously the success of Woody Allen's Whats Up, Tiger Lilly? Which Woody re-dubbed a Japanese flick for comedic relief was the motivation behind this project, hence the Whats Up title.

Fans of Mystery Science Theater 3000 are sure to get a big kick out of this thing. I have to admit it was done quite well and the over dubbing is hilarious. It's hard to believe but late night televisions Jay Leno took on the voice over of the main character played by Robert Clarke. Of course Leno has never done anything else remotely as interesting before or since in his career but it adds just a little more to the bizarre nostalgia that is Revenge Of The Sun Demon. There is also some added footage, which blends in with the original film amazingly. The intro is shot in color and Mark Holton, who I remember best as Francis in Pee Wee's Big Adventure and for silly roles like The Leprechaun and Gacy (2003) shows up for his first ever screen appearance as a drunken frat boy who watches The Hideous Sun Demon with his drunk friends and mocks the classic B-movie in true MST3K fashion.

The jokes are pretty raunchy in this thing and they bring The Hideous Sun Demon to a level of perversion that I didn't know was possible. Penis, poop, sex, and body fluid jokes are constant. We also have a naked she-sun-demon on display. For once we can let someone else make the jokes for us while watching our favorite campy B-movies. 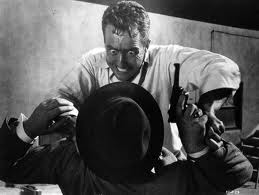 Email ThisBlogThis!Share to TwitterShare to FacebookShare to Pinterest
Labels: Monster Movies, Revenge Of The Sun Demon, Whats Up Sun Demon