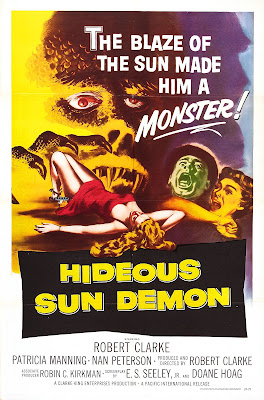 Actor Robert Clarke, who I remember best as the guy who thinks hes a dog in the Boris Karloff loony-bin flick Bedlam, tries his hand at directing along with Tom Boutross who would go on to editThe Town That Dreaded Sundown. What they came up with is one hell of a campy horror flick. 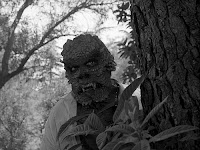 This 50's monster movie follows a young scientist played by Robert Clarke who is exposed to radiation in a accident at the lab and now has a horrible reaction to the sun. Sunburn isn't the word for it... With only minutes of exposure to the sun our scientist transforms into something that looks like a cross between The Creature From The Black Lagoon and The Wolf Man but unlike our reptilian creature from the lagoon this monster is lucky enough to be able to change back once he is out of the sun for long enough. However after a little baking in the sun our demon turns extremely violent. First he kills a rat by squeezing the life out of it (complete with a gooey, squishy mess). Later he will kill a dog and a total of three police officers. We get a cop down by hit and run driving and then some typical 50's monster style strangulation's.

We also get a bit of sex appeal from a blond lounge singer who despite his hideousness has a thing for our monstrous Sun Demon. Their first date consists of binge drinking, a bar-fight, a little bit of harmless drinking and driving and a frolic on the beach that ends with our blond bimbo wearing nothing but the monsters jacket. I suppose this got a bit of a reaction out of the teenage boy crowd of the time.

The final reel of the film shows the monster running amok while the police are on his tail. Wait... He doesn't have a tail. The final showdown takes place in an industrial area and has a sort of King Kong type ending with the monster falling to his death.

The Incredible Melting Man would rip this one off pretty badly in 1977 in a much gorier version. Still I found this one to be a pretty fun watch. Clocking in at 74 minutes, I couldn't help but wish there was more when it was all over. So if silly monster movies is your thing, I would definitely check this one out. 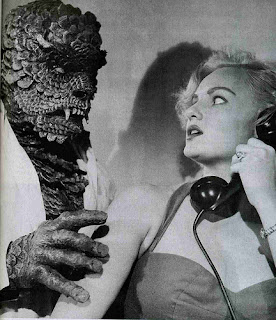 Email ThisBlogThis!Share to TwitterShare to FacebookShare to Pinterest
Labels: Blood On His Lips, Hideous Sun Demon, Monster Movies, Sun Demon (The), Terror From The Sun