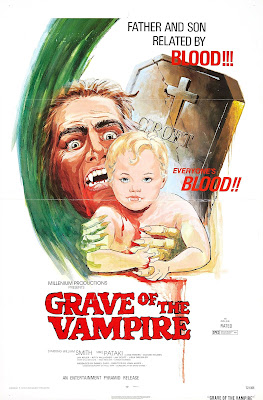 How does this even happen? The guy who directed this thing did one of my all time favorite roughies called Help Wanted Female. It sleazily depicts senseless violence and exploits sex to the fullest with an amazing pace that never bores. 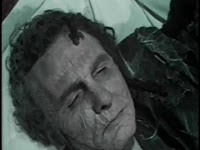 This piece of shit on the other hand starts off with a bang and becomes a total let down. In the early part of the film we are treated to a couple who leave a house party to spend some quality time amongst the dead in the local cemetery. Boy proposes to girl and I guess the setting turned her on as much as it did me because she says yes. Next a rotting corpse pushes open his coffin and he has a spider crawling across his hand and some kind of a lizard crawling on his face. The undead man looks more like a zombie then a vampire and is oddly reminiscent of the vampire in Herschell Gordon Lewis's A Taste Of Blood. Our grotesque vampire sneaks up on our couple while they are playing doctor in the back of the car and before the guy can let go of the boobage he is ripped from the car, lifted in the air and has his spine shattered on a tombstone. Next the walking dead pulls the girl into a grave and rapes her. The girl becomes pregnant and gives birth to a vampire baby and while breast feeding the little blood-sucker she accidentally cuts herself (I don't understand either) and spills blood on her baby sons face. Next she draws blood from herself with the help of a needle and feeds her newborn properly.

With an opening like that how can this movie fail? Well sorry to say folks but its all down hill from there. The vampire baby grows up with the mission to kill the vampire who raped his mother and created him. He finds his father vampire as a college professor and plots out how he will destroy daddy.

As I mentioned before, the vampire looks pretty damn cool in the beginning of the movie but through the rest of the film he just looks like a Cameron Mitchell look alike. I have nothing against Mitchell, in fact I'm a big fan but there is just nothing entertaining about his appearance.

We get a few more murders, non of which are very graphic or anywhere as cool as the opening cemetery scene. We get lots of boring dancing to shitty music. We get a stupid possession scene that doesn't make much sense and it all comes to a end with daddy and son brawling on a stair case, complete with (Yes, you guessed it) a wooden stake through the heart.

I feel fucking gypped and the worst part is that I now own two copies of this piece of garbage. For an interesting time with vampires check out Martin and leave this one in the grave where it belongs. 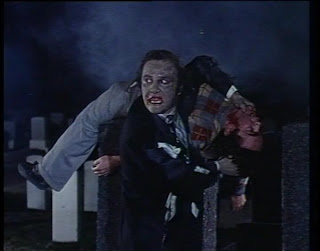 Email ThisBlogThis!Share to TwitterShare to FacebookShare to Pinterest
Labels: Grave Of The Vampire, Monster Movies, Seed Of Terror, Vampires