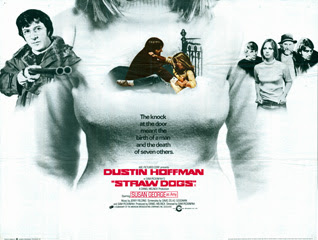 Cinema rebel, Sam Peckinpah delivers this classic tale of rape revenge right in the height of his career. Pecikinpah proved two years earlier with The Wild Bunch that he can build and build suspense and then deliver the nasty goods with a bang. He succeeds once again!. 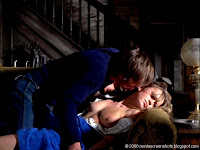 Wes Craven's cult classic Last House On The Left would follow in the next year and the Death Wish wouldn't hit screens for another three. Of course this genre of film has already been toyed with but perhaps Sam Peckinpah is once again under credited by genre fans.

Straw Dogs casts Hollywood lame-o Dustin Hoffman as a wimpy American married to a British women played by the incredibly hot and stylized actress Susan George (Die Screaming Marianne, Dirty Mary Crazy Larry). The couple move to a back woods shack in the middle of nowhere England and have more to deal with then relationship issues. Dustin Hoffman's character is a weak coward who runs from everything and avoids confrontation and Susan George has had enough of it. Ms. George looks as good as can be and the local pervy, lowlifes have some nasty plans for her. 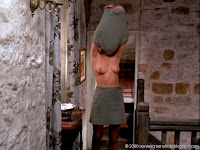 In Susan George's introduction the camera zooms in on her chest and her erect nipples poke through her sweater for all to see. She complains that the men in the village are undressing her with their eyes, as is the male audience. Her husband warns her to wear a bra when out in public and she ignores him. Peckinpah chooses a voyeuristic style of shooting her scenes. For instance, when she gets out of her car the camera gives a glimpse up her skirt, leaving the audience wondering if this is just carelessness on her part or if she enjoys taunting the men around her. Its not long before she is standing in front of her window with her beautiful bare breasts exposed, as the men stare in at her we suddenly realize that this is all going to end very badly.

The men become more aggressive and go as far as to kill the couples cat and hang it from a noose in a closet. Of course Hoffman is to much of a pussy to confront the men that did it and this shows them that they can walk all over this man and do what they want. Susan George is raped by two of the local scum and the rape scene is also open to suggestion because it seems to weave in and out of what is a mean spirited, violent experience to something that Susan George seems to enjoy at times. Eventually the rapists and three of their friends accidentally shoot the towns sheriff in a angry drunken stupor. Hoffman and George were witness to the brutal killing and the couple finds themselves fighting off a home invasion from the five drunk rapists and murders. Hoffman's character shifts gears once his life is threatened and kills the whole lot of them.

What Straw Dogs has in store for us next is some boiling vegetable oil to the face. A head caught in a bear trap, a stabbing, achy-breaky skulls are smashed with blunt instruments, a man has his foot blown off with a shotgun and another has his guts blown apart. We also have a pervy village retard named Henry who strangles a young girl in a barn.

Although Straw Dogs isn't quite an exploitation film. Fans of this type of extreme cinema are bound to love it. From the nasty rape scenes to the dead cat in the closet, the violent vengeance and not to mention the dead cop, Straw Dogs is another example of amazing renegade film making from Sam Peckinpah. Of course Hollywood has their greedy little hands on this title as well and the remake is due for release any day now. I doubt it will ever come anywhere near the original and I'm sure Peckinpah would be turning over in his grave. Until we have another outlaw director who likes to piss on the buildings of the executive producers, Straw Dogs will always remain king. 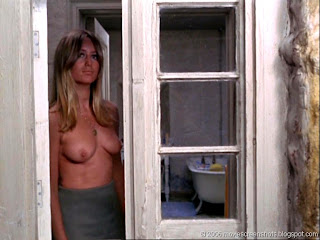