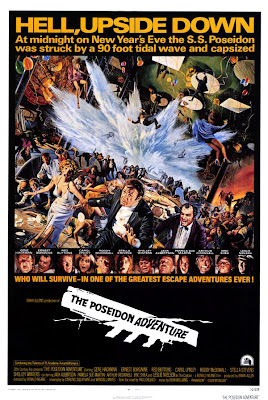 Poseidon Adventure is probably the greatest action/adventure flick of all time and it never seems to get old. Personally not being the biggest fan of these types of movies its pretty weird how obsessed with this film I am.

Right off the bat we have an amazing cast that merge together perfectly. We have Leslie Nielson as the captain of The Poseidon which will be hit by a massive wave that looks more like a wall of water. The Poseidon will be tipped upside down and of the 14000 passengers on board, only a handful will survive. Some of the survivors and non survivors aboard the ship consist of Gene Hackman who plays a renegade priest. Then we have the great Ernest Borgnine as the rude and crude loud mouth cop from New York along with his wife who is a ex prostitute played by Stella Stevens (Slaughter). Shelly Winters, who also has some blaxploitation credits to her name, such as Cleopatra Jones, has a big role as well. Rody Mcdowall (Class Of 1984, Fright Night) also appears along with Jack Albertson who I remember best as grandpa from Willy Wonka And The Chocolate Factory. Together they race against time as the sea watter pours in and follows them through the ship. The thing that makes this movie so interesting is that since the ship is upside down they have to work their way up to the bottom of the ship where they will try to exit.

The Poseidon Adventure offers up suspense and good acting but some extra bonus's are a dead hippie, a fat woman has a heart attack, two dead priests (one of which has a screaming match with god), death by electrocution, lots of death by drowning, death by fire, Stella Stevens panty-shots, "Just Panties, what else do I need?", and a whole lot of death defying action.

Although this was a huge box office hit The Poseidon Adventure has a huge cult following. I am part of that following and so is just about everybody else who gives it a watch. Skip the three useless remakes and stick with this timeless original. 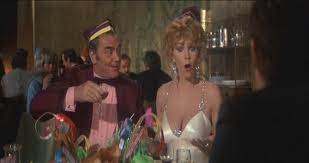