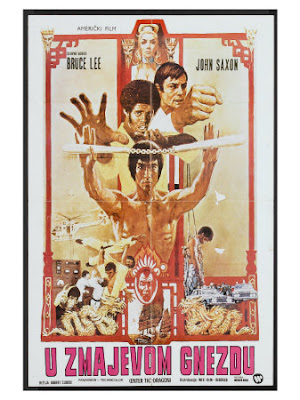 Enter The Dragon is probably the most important Kung Fu movie ever made, at least for American audiences. Reason being that is the first of its kind. Never before has an American production taken on a Chinese martial arts project and to take it on  such a high scale is a story all in its own.

Aside from being Americas first mainstream introduction to martial arts cinema, Enter The Dragon is also probably the sole reason for African Americans on going fascination with Kung Fu films mainly due to the introduction of Blaxploitation icon Jim Kelly, who would go on to do Black Belt Jones, with the same director. Personally I feel that Jim Kelly and Enter The Dragon had a huge impact on Americas black community and although Jim Kelly was a supporting actor to the commodity that is Bruce Lee, he certainly had a impact on cinema in his own way.

Of course it is Bruce Lee who brings the real life to this classic. Lee takes what would have probably been a generic Kung Fu flick and turns it into something meaningful. Looking at Enter The Dragon from the outside, one might think it is a typical one hundred minute spectacle of exploitative violence and although we get our fair share of slap-em-silly scenes, Bruce manages to add his personal philosophical views into the story and the violence is never uncalled for. "You can call it fighting without fighting". On the other hand Lee's choreography is meticulous and the fights look so real that it is almost impossible to believe that his enemies are not really being hit. Lee kicks the ass of dozens upon dozens of opponents. Some of the highlights consist of a broken bottle brawl that ends with Lee jump kicking his opponent across the screen, through a crowd of people and into some chairs. We also get a bad-ass muscle man who crushes his victims with his bare hands, leaving broken dead bodies to be dragged away. The character of Bruce Lee's sister puts on a good ass-kicking show before committing suicide. Faces are slashed with switchblades, heads are crushed with nun chucks, we have some poisonous snake action, prostitutes with painted faces, heroin addicted slaves, and what has to be the most memorable fight sequences in Kung Fu history involving a man with a claw for a hand battling it out with Bruce Lee in a room full of mirrors. John Saxon also has a pretty big role which is also a big plus and we even get a bit of tit from some sexy Asian ladies.

Although Bruce Lee says martial artists should never follow a style, Enter The Dragon has enough style to remain a classic for ever.