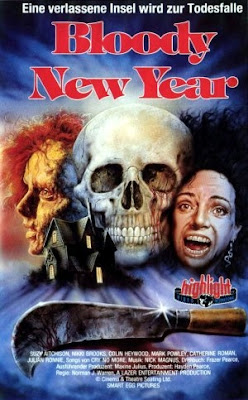 Yet another guilty pleasure of mine. If you took Evil Dead and mixed in elements of Lucio Fulci's The Gates Of Hell with a touch of Hausu and She, you would come out with something like Bloody New Year. Of course all of those other movies are better then Bloody New Year but that pretty much goes without saying.

I picked this thing up in my early teenage years on vhs with the cheesy skeleton in the party hat on the cover. The print was rather dark at times but that is hardly a complaint considering that the movie just doesn't make any sense.

Blood New Year also known as Time Warp Terror a.k.a. Horror Hotel (not to be mistaken for the Christopher Lee movie of the same name), tells of five teenagers (rather incoherently) who bump into three bad dudes at an amusement park. The teenagers play a game of hit and run and take refuge in an abandoned (haunted) hotel to avoid a serious ass kicking. Little did they know by entering the hotel they would stumble into a time warp. The hotel is decorated for a new years eve party and the hosts are a bunch of blood thirsty demons from 1959. Bloody New Year makes an awful attempt at explaining why the hotel is possessed/haunted but it is never clear and just doesn't make any sense. For those concerned it is supposed to be some sort of military experiment gone wrong when a airplane crashed into the hotel on new years eve in 1959 the crash shattered time and matter or some stupid shit like that.

However the plot is not the point here. Especially since most who stumble across this movie are expecting it to be a slasher film in the first place and are automatically disappointed to learn its a really bad Evil Dead ripoff. So roll with the punches and except this chaotic mess of a movie for what it is and bask in the glory of cheesy monsters, demons and special effects.

Bloody New Year offers up severed arms (complete with the red stuff), A shotgun blast to the guts, A fist is punched through a woman's stomach, A girl is pulled into a mirror, another is pulled into the walls of an elevator, furniture comes to life and sometimes bites, A monster come out of the screen in a theater and claw up one of our teenagers, Another victim has his achy-breaky skull split wide open with the blades from a motorboat, Another girl drowns, Fishing nets come to life and attack and in one of the most memorable and weirdest moments a table turns into a big slimy green monster?. We get stabbings and strangulation and countless other strange happenings.

Fans of 50's horror and scifi flicks will also be pleased to see that Fiend Without A Face is playing in the background in one scene. Also watch for the indoor snowstorm that is oddly reminiscent of Fulci's Gates Of Hell which is followed by a shot of a snow globe which reminded me a bit of Cemetery Man. However we can blame the director for stealing from all the other titles mentioned but Cemetery Man was of course a 90's film. Is it possible that Michele Soavi found some inspiration from Bloody New Year? I highly doubt it!
One of the biggest problems with this movie aside from the fact that it doesn't make much sense is how bad the acting is. These actors are really, really bad and about as unbelievable as can be. Bloody New Year comes from British horror/cult director Norman J. Warren, who was responsible for the gory Satans Slave which also is not very good but still holds a certain charm to it.

Only worth watching for lovers of weirdo low budget movies or as a time waster. This movie can also work to entertain a group of drunk friends as long as they aren't the cry-baby type who need a movie that makes sense. Pssssssh. 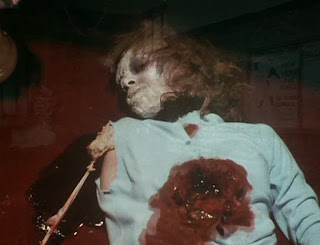