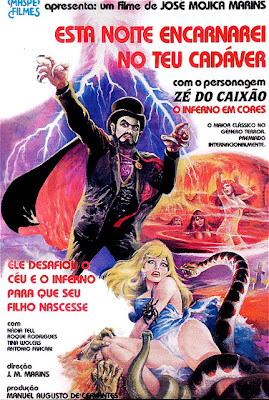 Jose Mojica Marins a.k.a. Coffin Joe follows up his blasphemous At Midnight I'll Take Your Soul with this equally mean spirited follow up. This Night I'll Possess Your Corpse starts off exactly where the first film leaves off and even though in the end of the first film we see Coffin Joe laying there with his eyeballs popping out, he is not dead. He is rushed off to the hospital where he recuperates and is eventually set back into the world that he resents.

Coffin Joe's contempt for mankind continues to grow and so does his obsession with having a child. "There's the most perfect creation of nature: children! Pity that they grow up to become idiots. In search of nothing. Lost in a Labyrinth of egoism... and dominated by a non-existent force: the faith in the immortality of the spirit. Man in his stupidity doesn't comprehend the only truth of life: the immortality of blood". This time Joe abducts six women and keeps them captive in a room where he will study them and find the strongest woman to bare his child. First off she must be an atheist. He believes that faith is for the weak and that a weak woman will taint the blood of his new born. Next he sets "hundreds" of tarantula's loose in their room while they sleep. The girls are covered in the giant spiders and only one of them doesn't scream. Naturally this is Joe's kind of girl. The remaining are locked in a crypt where they will meet their fate by killer snakes, with the exception of one girl who is given to his deformed partner as a birthday present. Joe's partner accidentally breaks the girls neck because he squeezed a bit to hard so Joe pours some acid on her face and we are treated to a nice flesh-eating moment. Anyway, back to the snakes... One of the girls places a curse on Joe and promises vengeance. The words of the dying girl contaminates Joe's mind and in a dream (or is it) he is dragged to hell by a black demon. Once in hell the film changes from black and white to full color. We have demons whipping men and women. Decapitated heads and dismembered body parts protrude from the walls, ceiling and floor. The ground splits and snow falls from the sky. Snakes slither free and the devil is of course Marins.

In the end Joe battles with his own lack of faith all while trying to survive the wrath of a angry religious town who want him dead. In the films final seconds Coffin Joe changes his mind and finds god but is still killed. This was the fault of the censors. I usually just ignore the last second of the film because anybody who knows their Coffin Joe movies would know that this was not by choice.

This Night I'll Possess Your Corpse also offers up a head explosion (complete with a giant boulder to the skull), a mouse crushed by a rock, eyeball gore, death by snakes, floating skeletons, a axe to the head, zombies, death by quick-sand drowning, naked women, naked men and many more tortures of hell. This is a must see for anybody who likes weird movies. The perfect follow up to At Midnight I'll Take Your Soul. Email ThisBlogThis!Share to TwitterShare to FacebookShare to Pinterest
Labels: Coffin Joe, Hauntings And Ghosts, This Night Ill Possess Your Corpse