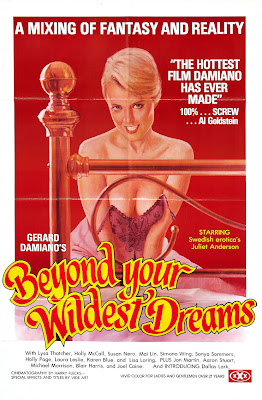 Not really what I look for in a movie as far as the plot goes but Beyond Your Wildest Dreams is still another example of a well made Gerard (Deep Throat, Devil In Miss Jones) Damiano flick. Damiano has proved with films like Odyssey that he is more then just a smut director with slick camera movement, eye-candy sets and surreal tones and I feel that he was trying for the same thing with this one but was just lacking in motivation.

Beyond Your Wildest Dreams very poorly tells the story of a group of people who are trapped inside the dreams of Sharon Morgan, played by Juliet Anderson known best for the Aunt Peg series. Throughout the film we don't know if we are in a fantasy or real life so I suppose the film worked on that level but I just found the story to be rather generic and boring. What we do know is that Damiano thinks up some twisted shit. Although the film may not be as perverse as some of the rougher rape/revenge flicks in the adult cinema world, we still get plenty of sleazy kink to get us through a weak story.

First off there is a more then normal fascination with semen in this one. In one scene we watch a guy bust a nut on a mirror and Aunt Peg licks off every drop. In another, the burning man-seed is served on a plate and a busty young actress laps it up. Then of course we get the necessary facial money-shots and Mai Lin (Prisoner Of Paradise, All The Way In) gets the messiest of them all. We also have some snow-balling on display. Then we have a ultra-trashy scene where Aunt Peg inserts a bar of soap where it doesn't belong and spits it out over and over. Damiano's signature shaved vagina scene comes before to long. "Looks like a little girls cunt. Eat my little girl cunt". I'd say there is definitely some kind of fixation with young girls on Damiano's mind because we also get a actress with braces on her teeth and that's just a little to disturbing to think about. Wildest Dreams also offers up some anal action and a really weird scene where a transvestite licks Aunt Peg's ass. Come to think of it Odyssey also had some transvestite-fu.