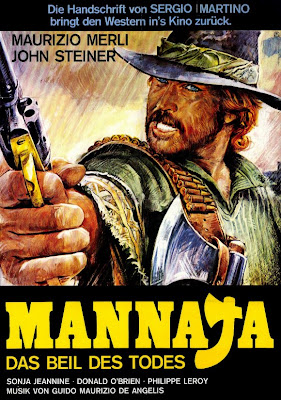 Director Sergio Martino (Torso, Mountain Of The Cannibal God, Hands Of Steele) chops into the Spaghetti Western genre with the tale of a bounty hunter who's weapon of choice is a hatchet.

"Those who know me call me Blade because I let this do the talking for me" Sure he uses pistols as well but he is a real bad-ass with his miniature axes. In the opening scene which is also the greatest scene in the movie Blade lobs off a mans hand and takes him prisoner. Later Blade sets him free and next time he appears he has a hook for a hand and  Blade burries another axe into his body, this time leaving him cold and dead. Hatchets are embedded into enemy's skulls, chests, backs and stomachs. In one scene our hero even beats the shit out of some big dogs with the hatchet. A Man Called Blade also offers up some social commentary on religious fascists and their moral laws, a massacre in a blackened cave (yes you guessed it, lots of Hatchet-Fu), a violent revolution between laborers with shovels and pick-axes against pistol wielding bandits, a slow motion shoot-em-up massacre (complete with squibs and a bit of gore), sharp twigs shoved into eye lids and a spike pushed into the throat, mud wrestling (between men), artsy-fartsy falling tree flashback scenes and a tale of vengeance.

A Man Called Blade is also the last wave of the Spaghetti Western and it borrows heavily from Enzo Castellari's Keoma which came out one year earlier and is a all around far superior film. The influence is so obvious with dozens of comparisons, right down to the music and general vibe that the film gives off but where Keoma comes off as a stylish. unique masterpiece, A Man Called Blade also known as Mannaja just comes off as a big ripoff. Another problem with this movie is that it runs slightly to long and it just seems to take for ever to wrap it up when it could have been done pretty easily. Still ripoffs can be a lot of fun and A Man Called Blade does have its gory moments. Check it out for some dismemberment and some violence in the mud but only secondly to the great Keoma. 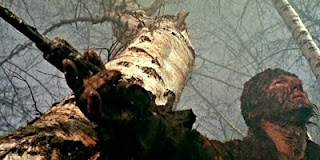