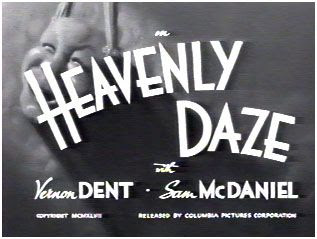 This is one of the weirdest of all Three Stooges shorts. Shemp dies but can't make it into heaven untill he reforms Moe and Larry. Shemp gets a lightning bolt in the ass and is sent back to earth as a ghost where he will act out his mission. 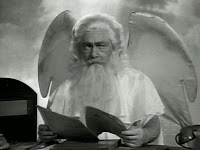 Instead of leading Moe and Larry down a ritouse path Shemp takes advantage of the fact that the other two Stooges can't see or hear him and beats them both silly. I guess all those beatings Shemp has endured from Moe over the years are finally justified in this short. Shemp throws drinks in their faces and kicks them in the ass any chance he gets. Not to mention the good ole sewing needle to the ass gag.

Moe invents a pen that can write under whipped cream and plans to sell it to a rich collector but Shemp messes that one up for his pals as well in a scene that ends in a typical Stooges mess. Whipped cream goes flying and Larry has the pen embedded into his skull in a brilliantly violent moment. Heavenly Daze also offers up the slightest bit of racism from a typical 1940's black butler who is scared of ghosts. Shemp also pulls off a great stunt in which he sets his ass on fire "Hey Larry! He's been smoking in bed again! Get the water and the axe!" and he jumps around a room as it spreads up to his lower back. Gotta love it! 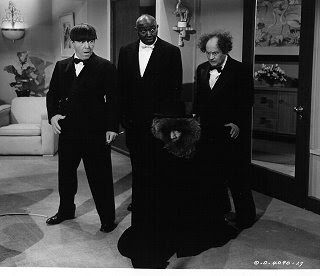