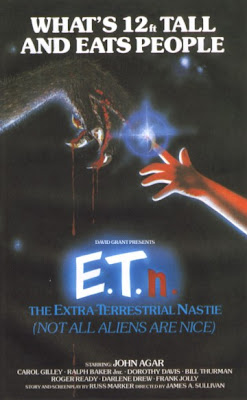 Night Fright not to be mistaken for Fright Night (1985) or E.T. The Extra Terrestrial with its future ripoff vhs art work. Its sad to say but both of those other two movies are way better then this thing.

What we have here is a late 60's giant monster flick. The only problem is that the movie is so damn dark we can barely see the monster at all. Aside from the complete lack of light this thing crawls along at an annoyingly slow pace. The majority of the run time is eaten with scenes of people roaming aimlessly through the woods. John Agar (Tarantula, Revenge Of The Creature) plays the sheriff who of course saves the day but Agar also spends most of his time walking around in the woods. When were not watching people wander around, we are treated to typical teenagers necking in their cars at lovers lanes. Fortunately for us the monster has a sweet tooth for young lovers but don't worry as soon as the monster comes the quality of the lighting will drop by 90%. Even if we could see the monster we wouldn't get to see the murders because every death scene cuts away.

Night Fright does offer up one dead cop, a cool surf rock soundtrack by "The Wildcats" complete with go-go dancing, and some really cheesy beatniks. Other then that Night Fright is a complete waste of time from the bottom of the barrel of giant monster movies. 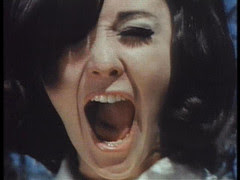