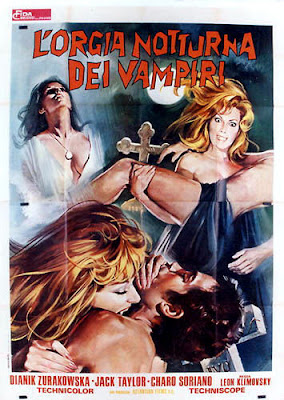 The plot follows a group of tourists on a bus. When the driver suddenly dies at the wheel the tourists pull into a small village which appears to be vacant and take a load off in a typical spooky castle like building. Eventually the towns people show up and the tourists are being drained of their blood, only to return as blood-suckers themselves. Jack Taylor (Succubus) who I remember best as the pectoral lecturing professor in Pieces plays the hero here but when he is not saving the day he likes to peep through little holes in the wall and watch girls get dressed in true Norman Bates fashion.

We also get an axe wielding oaf who lobs the limbs off of selected victims from the countess. Why exactly the countess orders dismemberment, I'm not exactly sure but I guess it adds a little bit of character to the movie. The film also offers up lots of maggots in scenes of decaying vampires but the best scene in the movie is the final chase scene in which Jack Taylor and his blond girlfriend speed through the village with vampires hanging off of the car. He smashes them into walls and sends them flying off his car and it makes for one hell of an entertaining scene. To bad The Vampires Night Orgy has such a horrible ripoff of an ending. The village and all of the vampires disappears into thin air and Jack Taylor stares into the camera with a look of confusion but he can't be more confused as the viewer. The only thing worse then a ending like that is the dreaded "It was all a dream" ending. Aside from the awful end the movie is entirely to dark. Its almost impossible to make certain scenes out and that always knocks a lot of points off of a movie. So unless you like to guess whats going on in your movies instead of seeing it, I wouldn't waste my time with this forgettable vampire tale. No real gore or memorable death scenes and the bare minimal of bare breasted women.