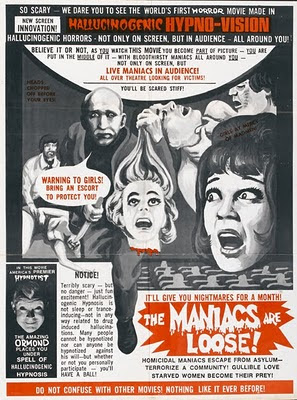 The Thrill Killers also known as The Maniacs Are Loose and The Monsters Are Loose is one of those awesome mean spirited exploitation flicks of the mid 60's. It has elements of a Roughie but it certainly doesn't fit into that genre. For some reason The Thrill Killers always reminds me more of movies like The Sadist (1963) with the great Arch Hall Junior.

Maybe its because Arch Hall was part of the same film ring as The Thrill Killers director Ray Dennis Steckler. Arch Hall Junior even stared in Steckler's first film The Wild Guitar as Bud Eagle the typical Arch Hall Jr. beach-bum who has entirely to much hair product in his blond mop and drives the beach-babes wild with his crazy guitar playing.

However as I mentioned before this one plays more like The Sadist. We have three escaped mental patients who are running around with axes, guns and knives, chopping the heads off of helpless victims. In one of my favorite scenes we see one of our escaped lunatics picking pieces of scalp off the blade of his axe and he says "Poor Jack, He had dandruff". This is a perfect example of the dark and yet humorous tone that runs throughout The Thrill Killers.

However the three escaped lunatics isn't even the best part of the movie. The best character is played by Ray Dennis Steckler himself and is credited as Cash Flag. Cash Flag looks like he belongs in a skinhead flick like Romper Stomper or something like that because Cash Flag a.k.a. Mad Dog Click looks exactly like a young hooligan with his tightly cropped hair and his tight blue jeans and boots. Aside from his menacing look he is one brutal mother fucker. He truly despises the human race and he gets his kicks from killing, hence the title. In one of his best moments we see him smack a prostitute all over her apartment. Next time I watch this movie I really have to count the slaps because there is a lot. Next he verbally abuses her and makes her quite aware of his hatred for human beings. He finishes the "Cheap" hooker off with a pair of scissors.
We also get a police massacre, a dead cowboy, death by poisoned coffee, a motorcycle and horse chase scene complete with shoot out and a murder. Throw in the decapitations and a dive off a cliff and we have one hell of a entertaining exploitation flick.

Those who are familiar with Ray Dennis Stecklers films rightfully might be worried. After all the man was responsible for such stinkers as The Incredibly Strange Creatures Who Stopped Living and Became Mixed-Up Zombies!!? (1964) and Rat Pfink and Boo Boo (1966) but The Thrill Killers is by far the best of his films that I have seen. Its up in the ranks of greats like David Friedman and some of Russ Myer's more violent work like Motor Psycho and Faster Pussy Cat, Kill! Kill!