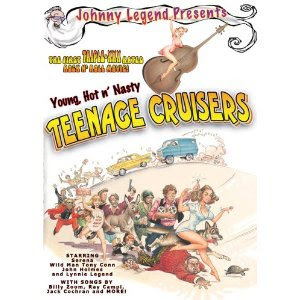 Teenage Cruisers also known as Young, Hot 'N Nasty Teenage Cruisers a.k.a. Cruisin For Sex and just plain Cruisin (Not to be mistaken for the Al Pacino homosexual slasher) is a big mess of silly scenes thrown together and director/Rockabilly singer Johnny Legend is probably mostly to blame. Not only is he into sleazy rock & roll and sleazy women but the man is a sleaze film-fanatic and you can really see all of his influence on the film. Cheap horror movie posters are plastered all over the walls, from movies like Creature From The Black Lagoon to Mario Bava's Black Sabbath. He also fills the movie to the brim with Rockabilly greats like Charlie Feathers and Billy Zoom. There is also an awesome song performed by Alvis Wayne called I Wanna Eat Your Pudding. I will definitely be searching for more Alvis after that song. Mr. Legend plays a radio show host and he also does a live gig and performs a few songs including Hot Rocks.

The main problem with this one is how mashed up it all is. We have Mr. Legend as the dope-smoking, hip, radio show host, we have a nympho maniac on the run named Babbs, we have a Vietnam veteran who blows a never ending load, we have 70's sex loops staring John C. Holmes, we have long haired hippies, greasers, a hit and run murder and a donkey-show. Yet somehow we are supposed to believe this is the 50's. It makes no sense. All of the cars are 70's vehicles and even the greasers have long hippie hair. This movie should be seen only by those who love weird novelty movies because it is as bizarre as they come, its just to bad the movie didn't make a little more sense. 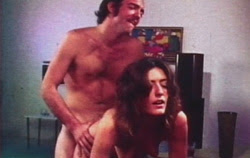