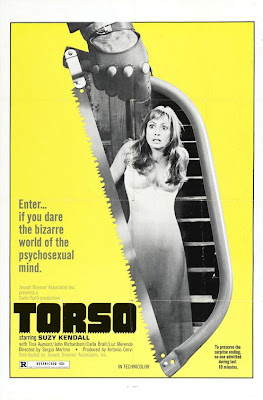 Sergio Martino, the same director who gave us exploitation greats such as Mountain Of The Cannibal God, Hands Of Steel and Screamers delivers one of the sleaziest Giallo's in euro-trash cinema with Torso. If you came to see beautiful butchered women, you came to the right place.

The full uncut version of Torso also know as Carnal Violence offers up lots of hot euro-babes who bare it all... breast and bush. The only problem is there is a sex-maniac running around in true Giallo fashion with black gloves and strangling the girls with a scarf. The killer also wears a mask that is reminiscent of a Mexican wrestling Luchadore mask. However last time I checked Santo didn't chop up any pretty girls in Santo Vs. The Zombies and I suppose the whole masked killer thing is more of an American thing then Italian thing, Except of course in very few like Bava's Blood And Black Lace. The iconic American masked villain-slashers like Michael Myers wouldn't appear on screen for another five years or so.

For me the plot isn't overly interesting on this one and the story doesn't keep you on the edge of your seat like some of the better Argento or Fulci Giallo flicks but then again. I came here to see people die and this guy is one sick fucker... In the one scene that made this film so affective for me the audience sees a girl who is hiding in the corner of a room that is filled with her best friends dead bodies. The killer hacks all of her friends up one by one with a hack saw. The girl witnesses everything and has to hold her breath (or vomit) back while the horrible atrocity is going on. This whole scene reminded me of the Richard Speck massacre with the one survivor hiding under the bed while her friends were being raped, murdered and mutilated. For this scene alone I found Torso to be delightfully sick and twisted and this moment in the movie earns the film the right to be gifted with a title as great as "Torso".

Lovers of blood, breasts and gloved killers should get a kick from this one. I won't say who the killer is because that's not any fun but I will say that fans of this movie would most likely be fond of the equally trashy Slaughter Hotel with Klaus Kinsky. 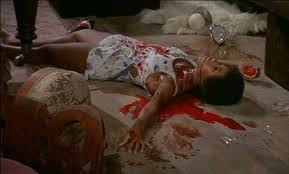