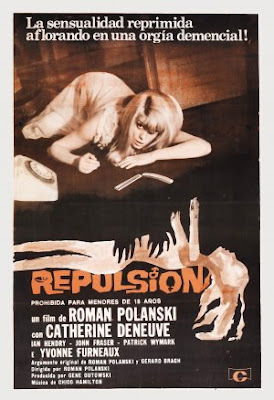 Repulsion is Roman Polanski's first film in English and he proves time and again that something as small as a language barrier can not stop him. He gives us a perfect film in the same vein as Hitchcock's Psycho. 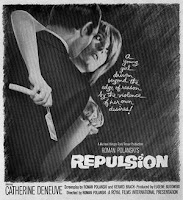 Repulsion tells the tale of a beautiful 18 year old girl and her descent through madness. The film makes no attempt to explain why, how or when her madness starts but instead uses unique camera angles and lenses to distort reality and the world around us. Repulsion truly is cinema in every sense of the word.

Another thing that makes Repulsion so amazing is the fact that there is very little dialogue in the film at all and the acting and cinematography alone is enough to tell the story. Our main character hardly ever speaks and this just makes the film all the more powerful. Our female lead takes excellent direction from Polanski and molds the ultimate man hating psycho out of all women nut-jobs in film history. As I said, we don't understand her contempt for men and neither does she but as the film goes on her Repulsion grows along with her repressed sexual fantasies and warped grasp on reality.

Perhaps the best part of Repulsion is the thought provoking state the film leaves you in after a viewing. It almost dares you to give it another go. For this reason I'm sure it did amazing in the box office. Its no secret that the film was a huge success for Polanski but I wonder how many people went back to see it a second time. It really is a work of perfection from the camera work to the creepy atmosphere. Repulsion made me jump on more then one occasion and it takes a lot for a movie to do that to me. Its a must see for everyone. 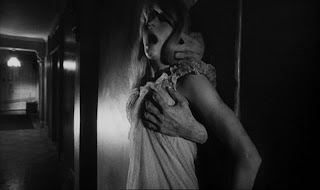 Email ThisBlogThis!Share to TwitterShare to FacebookShare to Pinterest
Labels: Repulsion