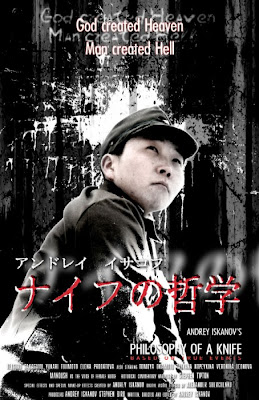 Philosophy Of A Knife is one of the most relentless and mentally trying films that I have ever tried to sit through. Its a four and a half hour long splatter-fest depicting the atrocities and human experiments lead by General Ishi and his Japanese scientist known as Unit 731, a top secret military unit doing research on biological warfare.

Philosophy differs from other films based on the exploits of Unit 731 in the fact that the film has no social message or standpoint. Those familiar with movies like Men Behind The Sun are aware of how grizzly and disturbing these experiments were but at the same time those other films tend to be a patriotic Chinese cry of dispaire. Philosophy is the exact opposite and is a much deeper film. Its part documentary with narration explaining the war and Japans scientific advances. We have interviews from a man who was there as an interpreter and the film also claims to have uncovered facts that were previously unknown to the world. Then the rest of the film is pretty much all reenactments of the experiments that went on in Unit 731. For me the films down fault was that they tried to add in a small story line about a Japanese soldier who is falling in love with one of the Guinea pig, prisoners. I felt it was a waste of run time and the film was long enough without it. Then the director chooses to shoot entirely to much snow footage which does break up the horrible torture scenes but really doesn't serve much purpose and causes the film to run even longer then necessary.

On the other hand Philosophy Of A Knife is one of the hardest films to sit through and I would never recommend trying to sit through the whole thing in one sitting. The film should be seen in two parts in order to keep the viewer from sinking into a depression. Its almost impossible to explain the cruelty that takes place in this movie and after watching it the movie from beginning to end its really hard to have any respect for fellow man. Some of the most disturbing scenes in the movie show a syphilis rape scene forced at gun point and the aftermath of a uncontrolled case of the sexually transmitted disease. We also see a prisoner who has a giant cockroach shoved up in her vagina and is later skinned alive in search of the filthy bug. We have a horrible scene where a boy is striped naked and brought out into the freezing cold where he is tied to a post and has cold water dumped on his body until he completely frost bitten. Then he is brought back to the lab where they put his limbs into hot water and his skin falls off until he is pretty much a skeleton. Children are sewn together, We get a disgusting abortion scene, veins and main arteries are sliced open with medical tools so the military can see how much time a soldier has to bleed to death when hit in vital areas. The torture goes on and on with gas chambers, torture by electricity, decapitations, dismemberment's, radiation and basically any other awful atrocity that you can think of.

After being subjected to the full 4 hours of these experiments I personally couldn't help but feel like I was tortured myself. If there is anything that Philosophy doesn't do it is glorify the violence. I have heard many call this movie a modern exploitation film with over the top gore. I don't know if I can agree with this statement because I felt the opposite. I felt the agony of those torture scenes and really couldn't wait for the film to end. It was just to much to handle and I have came back and watched the movie in full more then once to see if I found it as disturbing as the first time. The answer is yes. The movie seems to take a bit of your soul every time you see it and for that reason I feel that it is an important piece of cinema that needs to be seen. Now if you will excuse me I am going to go vomit! 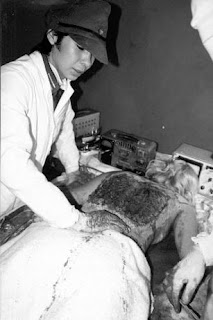 Email ThisBlogThis!Share to TwitterShare to FacebookShare to Pinterest
Labels: Documentary, Philosophy Of A Knife, Unit 731