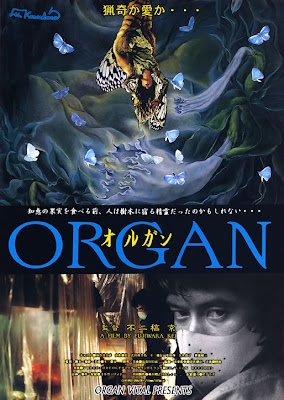 Looking at this poster one might think that Organ is going to be a fantasy type horror movie with bright colors and lots of cgi. It couldn't be any further from that. Instead Organ is a bloody gore fest filled with puss and rotten flesh. Its also a little to artsy for its own good which isn't so surprising considering it was written and directed by Kei Fujiwara, who most would remember best from her roll as "The Woman" in Tetsuo : The Iron Man.

Organ starts off with two police officers raiding a abandon warehouse where underground Organ dealers take their victims and remove the parts they want. Its a disgusting opening for a movie and it lets the viewer know what they are in for right off the bat. The only problem is from this point on the movie becomes so confusing with its constant plot shifting and new characters that I give up on trying to follow the story every time. For this reason Organ is more of a movie for me to watch while I'm getting sloppy-drunk with some friends. The gory images are as over the top as could be and its sure to turn a few stomachs. The artsy-fartsy stuff gets a little annoying at times and while I can semi appreciate what they were trying to do I can't help but wait for the next gross-out, spewing puss scene... The special effects are great and every character is a total sleazoid.

Fans of Guinea Pig 5 : Mermaid In A Manhole will be pleased to see another Japanese movie with weird rotting bodies that splash colorful gooey puss all over the walls. We also have a girl with a eye patch that would probably give Robert Rodriguez a boner. Not to mention the nasty child abuse that is going on in here. If only this thing could manage to follow a more coherent plot it would probably be respected by many. 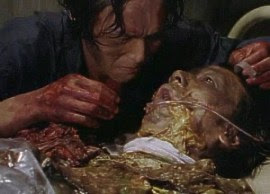 Email ThisBlogThis!Share to TwitterShare to FacebookShare to Pinterest
Labels: Organ