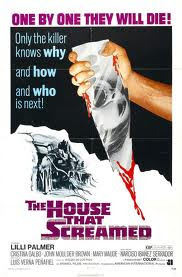 While watching this for the first time I kept thinking to myself, this thing has to be made for television. It's as soft as can be and the violence is to a bare minimal. The whole thing takes place in a boarding school for girls but there isn't any nudity. The girls even wear clothes in the shower scenes. Then I realized that this thing is widescreen, so there is no way that it was made for t.v. back in 1962 but it apparently was a big t.v. movie in Spain.

As I mentioned the movie takes place in a school for girls and it offers the perfect setting for a nasty Euro-Trash flick. We have the sadistic teachers, a pervy teenage boy who spies on the girls while bathing and there is even whippings for punishment. The problem is that is just done with to much class and we all know that class equals a boring movie... Why would you even make a movie like this and not bare any flesh or at least cash in on the sex and violence. Well I suppose this is why The House That Screamed is the perfect candidate for television. This is also why I completely despise the movie.

It did a good job as far as cinematography, lighting, setting and wardrobe goes because it is an effective period piece. It is sort of a clash between the Hammer Studios, Gothic horror and an Italian giallo with elements of a women in prison movie. We have a straight razor killer running around but he only kills two people on screen. Then we have a Pieces style ending when we learn that the killer is putting together his dream girl with the best body parts from each girl. The ending is stupid and the whole movie is a giant waste of time. Some how this thing got great reviews but for me this house just had me screaming for the end credits. Boring!