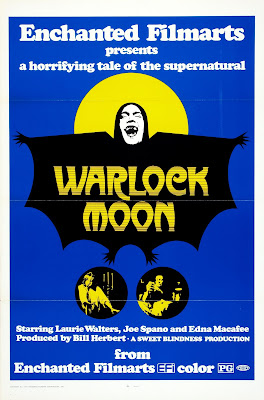 This movie is a prime example of when my trailer addiction comes to bite me in the ass. Warlock Moon's trailer makes it look like its going to be a blood soaked slasher with some added supernatural crap for extra ridiculousness. Then there is also the fact that Warlock Moon also known as Bloody Spa is often related to The Texas Chainsaw Massacre. Which is completely ridiculous.

There is one scene that is almost identical to the great Texas Chainsaw Massacre (T.C.M.) and its the moment where the kids first find the creepy old house in the middle of nowhere. Aside from this scene the two films couldn't be more different. Texas Chainsaw is a harrowing tale of cannibals and the victims decent into madness where Warlock Moon is a silly flick filled with goofy characters who wear fake nose & mustache glasses and as far as my expectations for a gory slasher flick goes... Well lets just say all of the murders happen off screen and the most brutality we witness is a old lady drinking some blood.

Warlock Moon was a complete let down and the fact that anybody would relate it to T.C.M. is just offensive. Just in case if the trailer wasn't misleading enough they made sure to give the film a title that has no comparison either. There is not a Warlock to be found in the whole damn movie. Skip it!