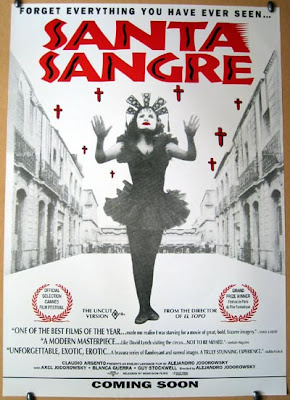 Santa Sangre is probably the most coherent of all Alejandro Jodorowsky films. It follows a young boy who grows up in a circus, raised by his religious-crazed mother who has her arms chopped off by her lover. The boy witnesses the dismemberment and is committed to a mental institution where he is surrounded by prostitute loving down syndrome kids. Eventually the boy escapes from the mental ward and is reunited with his armless mother. Together the mother and son take a murderous vengeance on society by slashing up some women.

Santa Sangre which translates to Holy Blood has its share of the red stuff which is expected because it is a horror movie but it also has the strangeness that one would expect from a Jodorowsky film. The camera work is amazing and we are treated to odd visuals of deformed freaks, animal death, and of course religious mayhem that is almost necessary for a Jodorowsky film. Some of the craziness that Sangre has in store for you is a elephant with a severe nose bleed (who is eventually ripped apart and eaten by peasants), A woman who is tattooed from head to toe doing some sexy stretching in very small underwear, dead chickens rain from above, death by circus knife throwing, mimes, tattooed children, Al Jolson styled clowns (Complete with Black-Face), Fat hookers, retard dancing, A man has acid thrown on his penis, we get a suicide by throat slashing and a really cool Argento style murder scene.

Aside from the amazing visuals and the crazy circus acts. Santa Sangre has one of the most unique duo of killers in any movie. The mother character has no arms so the son hides behind her and puts his arms through her sleeves so she can use his arms to kill. It all stems from an old circus act but in the film its almost as if the boy has lost his identity and just becomes a moving vehicle for his deranged mother. Of course there are some twists and this is looked into much further but it still makes for a very interesting watch.

Critics always compare Alejandro Jodorowsky to Tod Browning (Dracula, Freaks) mainly for their mutual obsession with circus life and freaks in general. This film however is usually related to Browning's Alonzo The Armless with Lon Chaney Sr. Mainly for the murdering, armless knife throwing killer but if you think back Alejandro Jodorowsky has already explored this in El Topo. We have that great scene of the man with no legs riding on the back of the man with no arms. Together these two cripples make a pretty deadly team as long as they have a gun.

The films of Alejandro Jodorowsky is something that must be explored by anybody who is into the artistic, alternative style of cinema. I have been lucky enough to catch El Topo, Holy Mountain and Santa Sangre in the theater and each screening was an experience in its self and its a far leap from the dvd's and home viewings. 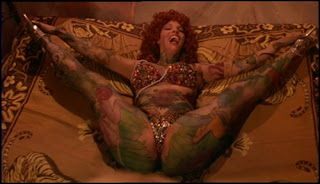