Jacktown is supposed to be the true story of a Juvenile Delinquent who is sent to Jacksonville prison (A prison with a very unique and violent history) for statutory rape. Our delinquent is involved with drug trafficking, mugging, heists and of course fornicating with 15 year old girls and is sent to the big house where he will meet other real life losers.

Jacktown starts off with a bang. We see our anti-hero and his delinquent friend clobber a middle aged man in a botched up mugging scene and its not long before a narrator comes in and explains the history of Jacksonville prison. According to the movie two inmates held a prison guard hostage and eventually took over the prison. This lead to a two day riot where inmates took out their anger on prison guards and other faculty. After the two days were up the inmates started running low on food and turned against each other. You can only imagine the violence and bloodshed that took place behind those prison walls. The governor eventually met an agreement with the inmates. If they stop the revolt they will all be treated to a steak diner and ice cream for desert. As cool as this background story is we don't get any live footage of the violent prison riot. We do get a bunch of stills showing the damage done to the prison. I guess a picture is better then nothing.

Unfortunately the film really slows down when it becomes a love story. Our pretty-boy delinquent is given special rights by the warden for some reason or another and is allowed to work in the wardens garden.

The wardens daughter happens to be no other then Patty (The Bad Seed) McCormack. This time Patty isn't a murdering sociopath. Instead she is the not so smart, rapist sympathizer. Its not long before the warden notices that his hot daughter is spending a little bit to much time with our handsome rapist and he removes the kid from garden work at his house. Our delinquent makes a jail break and runs off to see innocent Patty McCormack and she bribes him with some virgin vagina to go back and finish out his sentence.
Jacktown is silly and a bit stupid and not quite as fun as other Juvenile Delinquent films of the sort but it does have its moments and some funny quotes. "He's sitting in my back yard right now, listening to that awful rock & roll". Worth a watch for fans of this sort of movie just don't expect any big rumbles or another Black Board Jungle. 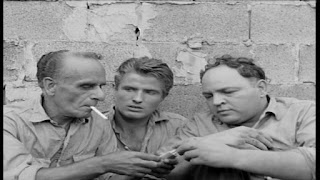