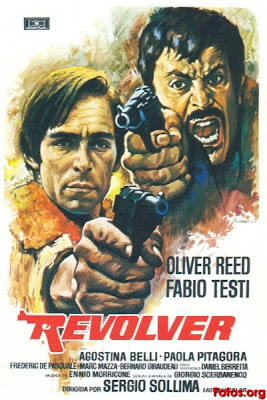 This one also goes by the name of Blood In The Streets but blood there is very little of. In fact this is probably one of the most boring Italian crime flicks I have ever seen. It stars Oliver Reed as a pissed off cop who's wife has been kidnapped by the mob and costars Fabio Testi (Lucio Fulci's Contraband and What Have You Done To Solange?) as escaped convict.

Oliver Reed follows mafia orders and helps Fabio Testi escape from prison. In return the mob is supposed to uphold their half of the bargain and release Reeds wife. Well there are a whole shitload of twists in the plot and it turns out that there is a price on Testi's head (Ha Testi's-head just doesn't sound right) and Reed and Testi join forces against a powerful mob who's arms stretch from common street criminals to cops and even politicians.

The main problem with Revolver is that it just isn't violent enough and the constant plot twists get tiresome and eventually annoying. The viewer awaits the big final shoot-em-up revenge scene and it never really comes. Revolver also sports one of the biggest cop-out endings of all time and I felt cheated just watching this thing on dvd. If I had seen this in the theater back in 1973 I would have wanted my money back or possibly have put a hit out on the writers head. 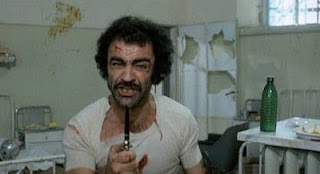 Email ThisBlogThis!Share to TwitterShare to FacebookShare to Pinterest
Labels: Blood In The Streets, Crime Films, Revolver