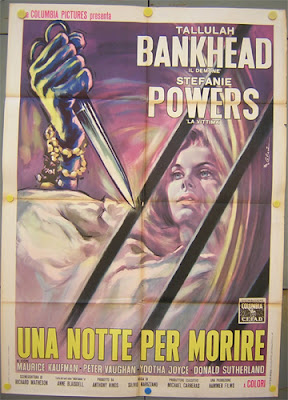 I first saw this one as young teenager on television. I believe it played back to back with What Ever Happened To Baby Jane. The two movies go pretty well together and for all these years I thought I liked the two movies equally. Ten or more years later I finally get myself a copy of this out of print Hammer flick and I wish I felt the same about it. 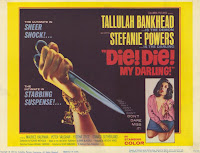 Although similar in plot. Die! Die! My Darling can not be compared with What Ever Happened To Baby Jane. Baby Jane is a far Superior film. Still this doesn't mean Die! Die! was awful... I found the first half of the film to be almost obnoxious with long boring scenes involving the religious rantings of a mad women. Eventually the psycho grandma turns more violent and the movie starts to pick up but the first half is pretty unbearable.

Its about a soon to be married woman who is invited to her ex boyfriends mothers house. Its not long before our main character realizes that her would-have-been mother in law isn't quite right in the head. She is held captive and terrorized by the old woman who blames her for the death of her son.

We get one attempted rape scene, one green (very green) rotten corpse in a bathtub, a murder by stabbing, a murder by gun and a scene that proves running with scissors is bad... However my favorite character in this movie is Joseph the retard played by Donald Sutherland. Yep that's right, Donald Sutherland plays a Jesus loving, violent, drooling, retard. He did this film for Hammer Studios right after he did Dr. Terrors House Of Horrors which I find to be a much more entertaining movie.

Die! Die! My Darling is worth a watch if you can bare through the first part but when its all said and done it turns out to be a better song then a movie. 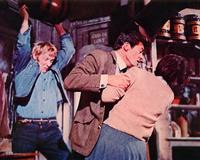 Email ThisBlogThis!Share to TwitterShare to FacebookShare to Pinterest
Labels: Die Die My Darling