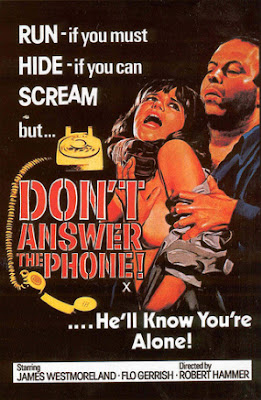 1980 and 1981 was such a great time for Slashers. We had huge titles like Friday The 13th but then we also had the really nasty, violent ones like Maniac and The Prowler. Don't Answer The Phone holds the same tone as movies like Maniac with its level of realistic depravity.

The thing that separates Don't Answer The Phone from Maniac is the lack of gore but its understandable considering the psychopath in this movie is a strangler. I have to admit the gore hound in me was just a bit disappointed with the lack of the red stuff but Don't Answer The Phone is still very affective without it. Our villain is a total nut-bag who fancies himself as a sort of prophet who's mission is to cleanse human garbage through vicious strangulation and of course rape. "Was she raped? In every orifice in her body". We have seen the religious fanatic, psycho in countless slasher flicks but the thing that makes this character so interesting is that the viewer never really believes that he even feels what he is doing is right. He's a total sicko and he hates human beings and his only gratification in life is doing harm to others. Then there is the fact that our killer is always making crazy faces and his personalities seem to switch at the drop of a hat. 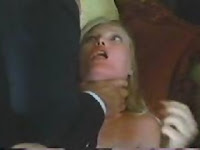 Since our killers weapon of choice is a pair of pantyhose that he can tighten around his victims throats we get quite a bit of nudity. Every killer has style and this guy isn't content with just going down to Macy's and buying a new pair of stalkings. He takes each pair off of his victim and will use it later on his next. I felt that this gave the killer a bit more depth and all though there was more room for character development I don't think any viewers will be disappointed by the films climax. Everything becomes quite clear as to the kind of man the killer is.

Fans of "Don't!" movies such as Don't Go In The Basement, Don't Go In The Woods, Don't Open Till Christmas etc. should really add Don't Answer The Phone to their collection its a true sickie from the most vile year of the Slasher genre. 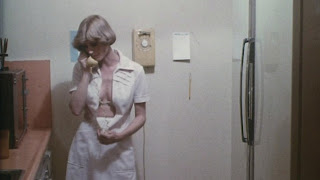