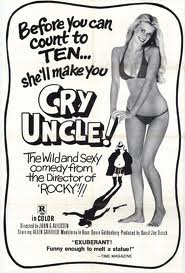 After watching a crazy sexploitation spy flick like Cry Uncle its almost impossible to believe that the director would go on to do Hollywood sleepers like Rocky and the Karate Kid trilogy. On the other hand he is the same madman that gave us the 1969 hippie-killing Joe. What a great one that is!!! Cry Uncle has some hippies thrown in for added fun but in reality it is just one hell of a sleazy movie.

Its filled from beginning to end with male and female full frontal nudity, we get necrophilia, a rich and powerful sexist who molests women at will, simulated statatory rape, gay sex and every type of fetish you can think of is mentioned. We even have a hardcore scene thrown in which they used the film negatives to show instead of a crisp print. The best part is Cry Uncle is a comedy. Only in the 70's would someone make a comedy like this. It makes me sick to my stomach when I hear people say "we came such a long way" and movies like Something About Mary are so racy. Not the fact! I wish movies like Cry Uncle were still being made today.

It tells the tale of a fat private dick named Masters, who takes on a new case with the help of a prostitute and his nephew who is supposed to be a minor. It just so happens that this new case involves every kind of pervert you can think of and the rest of the story doesn't matter because what we get is 90 minutes of pure filth and madness.

Masters seems to have no problem parading around naked with his giant man-gut and not so giant penis. One can't help but laugh as this slob spills milk on his naked body or gets his penis washed by black hookers. "Hey you're gonna make it shrink... If it shrinks any more, we are in trouble".

My personal favorite character is Mr. Dominic. His introduction shows him reading a 70's issue of Screw magazine on his private boat and this guy just has all the best lines. "There are two types of people in this world... Those who fuck and those who get fucked". "Ya know why I'm so happy? It's because I'm not a woman! How can anybody be happy when they get fucked all the time". Its really hard to pick a favorite but I also found this quote to be very pleasing on the ears, "She had a pussy like honey" or this one, "She's soft on the outside like a babies bottom but in the inside she is steel machinery" what ever that means.

Cry Uncle is the perfect movie for any pervert like myself who loves pure smut for filth sake. I'm not sure if anybody ever found this thing to be sexy but I sure did find it funny. Cry Uncle is going down into my top favorite comedy list. 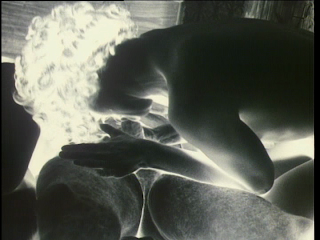