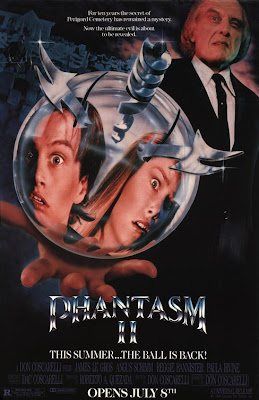 Almost a decade later a sequel is released to the classic 1979 killer-balls flick Phantasm. Where the sequel doesn't hold up to the originals horror or weird dream-like atmosphere it attempts to pick up the slack with 80's gore and action. I suppose it does an okay job in that department but the story is an outright mess.

The reason the original movie worked so well was because we had all these really strange things going on, most of which went unexplained, which makes a sequel a very difficult project. 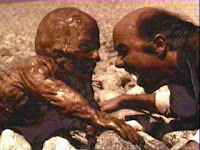 Part 2 does not feature older brother Jody. Jody is dead and little Mike has been locked away in a mental institution for the past decade or so and he is finally released back into society where he will be reunited with cinemas only balding, ass-kicking, ice cream vendor Reggie Bannister and together they will travel across country in search of The Tall (Angus Scrimm) Man. Most Phantasm fans including myself consider Reggie the real hero and not Mike. I assume its just because his character is so ridiculous. Well in Phantasm 2 Reggie has no lack of screen time. He has sex with a long haired skinny brunette. He pisses in public, He customizes his shotguns into a quadruple barrel shotgun and he has himself a nice chainsaw fight complete with genital wounds.

Mike & Reggie travel from town to town in search of The Tall Man but always seem to be a step behind. They come across abandoned towns that have been completely destroyed by The Tall Man. The cemeteries are empty because the corpses are turned into shrunken down zombies and we also get more of the killer-sphere-fu. In one scene a man has his hand drilled into by the shiny ball, leaving him no option but to cut his own hand off with a hatchet. We also get a gruesome scene where a killer-ball carves its way into a mans body and rips him up from the inside and eventually comes out through his mouth. My personal favorite scene involves a bit of sacrilege when a priest is hung by his own rosary beads. We get some nice imagery containing a inverted crucifix and a bit of blasphemous philosophy from The Tall Man.

On the down side things seem to happen for no reason and where the original was creepy and mysterious this one just keeps the audience saying WHAT THE FUCK IS GOING ON!?!?. Still Phantasm 2 is a fun sequel and holds a place in my heart ever since I first saw it on Monster Vision with the great Joe Bob Briggs. We also get some exploding eyeballs, a human meltdown involving that pretty puss-like yellow substance that we all love so much from the first one, Two exploding houses, a Nightmare On Elm Street type scene where a Kruger type head rips its way out of a young blonds body (its a dream of course), Flamethrower-Fu and a bit of tit for all the boys out there.
I wouldn't waste my time with any of the other sequels. They are just awful. As far as I'm concerned there are only two Phantasm's. Or maybe its one and a half... 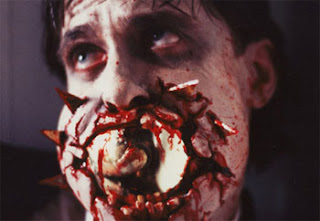 Email ThisBlogThis!Share to TwitterShare to FacebookShare to Pinterest
Labels: Phantasm 2