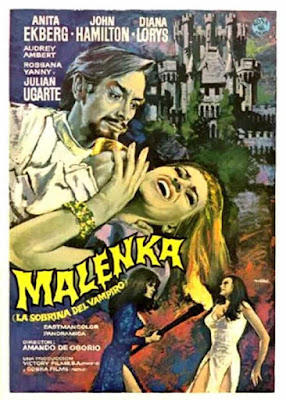 The director that gave us The Tombs Of The Blind Dead series is to blame for this Spanish/Italian vampire bore. I'm afraid that Fangs Of The Blind Dead doesn't offer an inkling of the entertainment that the living-dead, Templar knights, Blind Dead flicks would have in store for us.

This schlocker would later be billed with two other films on a horror triple feature. With Revenge Of The Living Dead and Curse Of The Living Dead ahead of it. It made for one hell of a trailer that can be seen on Mad Rons Prevues From Hell and is sure to catch the attention of any true horror-trailer-fanatic.

Fangs Of The Living Dead (from what I can remember) tells the oh so familiar tale of a woman who inherits a castle only to find that it is inhabited by a Peter Cushing looking fellow with a bad beard and a harem of attractive vampire babes. Unfortunately for us Fangs Of The Living Dead doesn't take the sleazy Jesus Franco route and offer up vampire lesbianism. In fact it doesn't even allow for any naked flesh. Some of these big-toothed beauties are looking pretty fine in the breast department and its a damn shame that we don't get a bit of tit. Nudity goes a long way and probably could have helped this thing move along at a nicer pace.

We get a few scenes in which a dark haired vampire is chained up and whipped by the Cushing look alike and some really bad dialogue but other then that and the busty babes the only other interesting moments shows a vampire melt-down. Skip the movie and check out the trailer for a much better time! 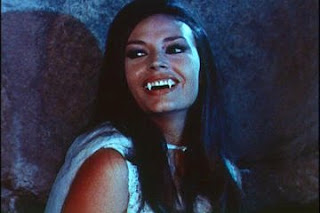