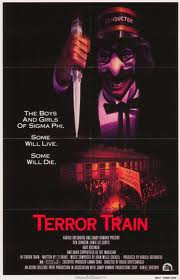 Jamie Lee Curtis is terrorized yet again in this 1980 slasher. Although Prom Night which came out the same year is the more popular of the two Terror Train is still a cool little slasher flick with a few elements that make it stand out from the rest. First off the killer changes his mask constantly which keeps the movie interesting and unpredictable... Well at least unpredictable for a "typical slasher".

Along with the constant change of masks and costumes the killer doesn't have a weapon of choice. He uses swords, knives, an axe and various other sharp objects. Jamie Lee Curtis digs back to her Halloween weapon of choice and proves yet again that a coat hanger can do damage on more then a unborn. My main problem with this movie is that to many of the murders happen off screen. Still the aftermath is somewhat satisfying and we do get a bit more blood then the average off-screen-slash-em flick.

Another thing that makes this movie unique is that the famous magician David Copperfield plays a big role and also has a death scene. This is Copperfield's one and only film. Perhaps he didn't enjoy having a sword pushed through his torso and head.

Terror Train is one of those 80's horror flicks that is filled with characters who like to play really silly and usually gory pranks on each other. Similar to movies like April Fools Day or the character of Shelly in Friday The 13th Part 3-D. Although still cheesy I suppose the gags are slightly more effective in this one. One of them offers up a scene with a mutilated torso, complete with a bit of necrophilia.

I personally have a thing for these horror on a train movies. Night Train Murders is my personal favorite. Then you always have the nazisploitation movies like Hell Train and Fraulein Devil. Check this one out for ridiculous costumes, Jamie Lee Curtis & magic shows. 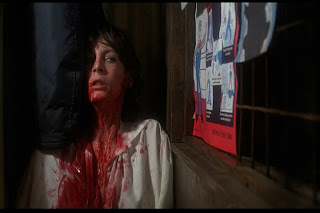