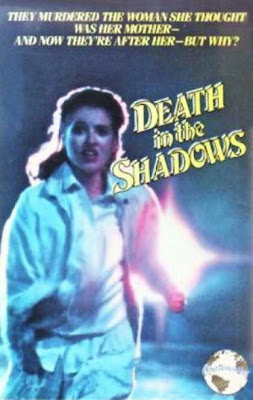 I now know what Johnny Rotten meant when he said "Ever get the feeling you're being cheated". He must have seen Death In The Shadows. Okay maybe not because he said that in 1978 and this piece of shit came out in 1985. Either way I definitely feel cheated and forcing myself to sit through it in it's entirety was a task and a half.

The title is Death In The Shadows and I find that quite suiting considering the few murder scenes take place in the dark. In fact these shadows are so dark you can barely see whats going on. This movie makes Andy (Ghastly Ones) Milligan's movies look well lit.

The story: follows a 17 year old girl named Valerie (in the shadows of course) who's mother was murdered by a hit and run driver. After the autopsy Valerie learns that her mother was a virgin there for she is not in fact her mother. The deeper she digs to find out who her real parents are the more the danger grows. She is stalked by a mad man with something to hide. He murders Valerie's uncle and slashes Val up a bit in one scene but none of it is interesting or worth watching. Valerie gets naked a few times but its usually to dark to enjoy the sites.

Stay far away from this Dutch title. You're better off turning off your lights and trying to watch the posters on your wall.
Click the image below for an example...

Email ThisBlogThis!Share to TwitterShare to FacebookShare to Pinterest
Labels: Death In The Shadows, Mystery