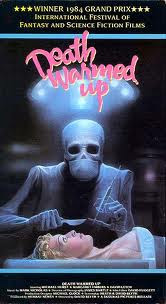 If this one isn't from Mars then it definitely must be from New Zealand. This 80's gore flick is totally off its rocker. It doesn't make to much sense but its a whole lot of fun to watch.

A mad scientist hypnotizes a kid with murder for a mission. The kid blows away his parents with a shotgun in gory detail and he is locked away in a mental institution ran by the very same mad scientist who had him blow away his parents. Seventeen years later the kid is released from the loony-bin and he tracks down the mad scientist who did him wrong to act out some revenge but things don't go as planed when there is a outbreak of sub-human, lunatics with very violent tendencies.

Its a cool story but it really doesn't make any sense. Things seem to happen for no reason and are never explained. We don't even ever find out why the mad scientist is creating these sub-human, psychos. Another thing that is really weird about this movie is that the kid who is seeking revenge brings three friends along with him on a vacation. His friends are unaware that they are going to be taking part in some bloody vengeance.

On the other hand Death Warmed Up is a totally fun gore flick. It doesn't even really fit into any horror sub genre because it plays like a cross between a post apocalypse flick and a zombie movie. With human melt-downs and of course the mad scientist.

The movie offers up some exploding head action, more then one open brain surgery scenes complete with bone saws and other skull cracking devices, We get 80's achy-breaky skulls complete with that special effect that was used in all the 80's werewolf movies, where it looks like there is a balloon under the flesh. A sexy nurse is stabbed with scissors (complete with bloody splatter), two shotgun murders (complete with flying guts). Dirt bike chase scene that ends with a biker impaled on a pole (complete with gut spilling), repeated gut stabbing, a pervy hunchback, a tid bit of tit & a muscle man shower scene from the guy who played in that awful 90's Hercules television show.

Leave your brain at home or with your favorite psycho-surgeon and check out Death Warmed Up for a splattery good time from New Zealand. 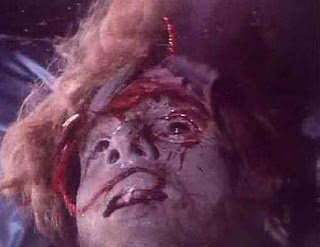 Email ThisBlogThis!Share to TwitterShare to FacebookShare to Pinterest
Labels: Death Warmed Over, Death Warmed Up