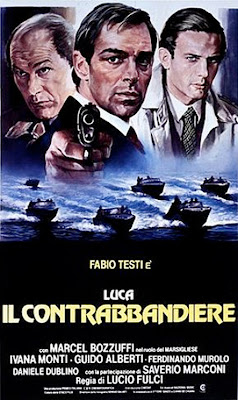 Luci Fulci is remembered by most for his graphic violence and gory depictions of death in his horror films. He is recognized by many as The Godfather Of Gore, a name that is also used while referencing the great Herschell Gordon Lewis. Many of Fulci's films outside of the horror genre go unwatched by the pure horror audience which is a big mistake because he has ventured into many different genre's. Sexploitation movies, comedies and crime flicks like Contraband still have much to offer and sometimes can be as gory as his horror flicks.

Contraband offers up plenty of the red stuff, with graphic scenes of gun violence. We have brains being blown through the back of skulls, shattered skulls, machine guns to the face, a woman has her face burnt off with a blow torch and it is one of the few moments in cinematic history where it is shown in great gory detail. Contraband shows massive shotgun wounds to the torso (complete with chunks of guts flying across the screen), a nasty rape scene, brutal stabbings... Couples are blown up in bed while screwing for fuck-sake. Contraband is pure bloody mayhem.

These were Fulci's greatest days. The cult classic Zombie a.k.a. Zombi 2 would come out only one year before this epic crime flick and titles like The Beyond, Gates Of Hell and New York Ripper were right around the corner.

Fabio Testi (What Have You Done To Solange?) takes on the main role as Luca, a member of an Italian mafia family who has a vendetta against rival crime lords who killed his brother. Ajita Wilson (Sadomania, Hell Penitentiary) also shows up as a prostitute and shows a bit of tit as usual. Fulci himself also appears in a much appreciated cameo as a machine gun wielding psycho who blows away the enemy and leaves a bloody mess as well.

Contraband is probably my favorite of all Italian crime flicks and is on the top of the recommendation list as far as I'm concerned. Gore galore! 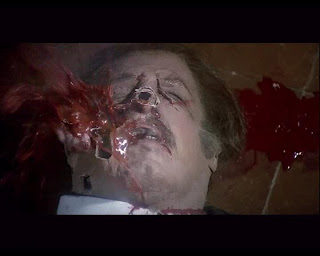