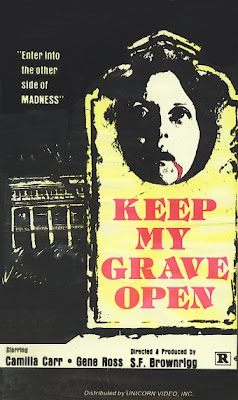 S.F. Brownring, the director of the great loony-bin flick Don't Look In The Basement goes on to do Keep My Grave Open. Also known as The House Where Hell Froze Over... Well you can call it whatever you want but I call it a piece of shit. Somehow this movie has good reviews but for the life of me I can't understand how because its just plain boring. We get a few slash-em-up scenes but the gore is as limited as can be and the weapon of choice is a sword which is kind of lame. Keep My Grave Open offers a body count of five but none of the deaths are interesting. There is no nudity to be found either and the whole thing is just a big sleeper.
The movie follows a mentally disturbed woman who believes her brother is her lover and is living with her. Her delusions become dangerous when she starts dressing up like her brother. She is sort of a reverse Norman Bates. The doctor in the film would probably be rememberd by most as the Judge in Don't Look In The Basement. "Use the axe judge! Use it! Strike down Judge! Again Judge! Once more!" He also appeared naked in the shower scene in The Goonies. Gene Ross also has a few other interesting credits to his name but he couldn't save this one. S.F. Brownring should have done us all a favor and just did a sequel to Don't Look In The Basement. 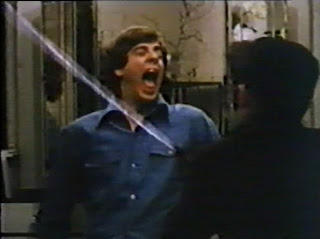