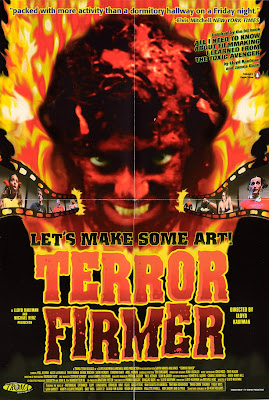 Man, I love this movie. Terror Firmer is of course a Troma film but its one of my favorites from the team. Lloyd Kaufman gets back in  the directors chair and shits out the best movie he has done since the 80's with movies like The Toxic Avenger and Class Of Nuke Em High. 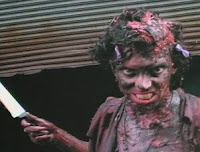 With a pace that is faster then hell and every frame filled to the max with extras and any kind of oddity that you can think of Terror Firmer makes for one of the silliest and fun gore flicks ever made.

It is also sort of Kaufman's autobiography. The plot revolves around an independent film crew (Troma Studios to be exact) who are struggling to finish the latest Toxic Avenger sequel. There is a murderer running around on set killing off the cast and crew in slasher fashion and every kill is soaked with blood. Scream queen Debbie Rochon shows up as a nymphomaniac who offers up some bare breasts in numerous sex scenes "Don't get any blood or snot on my hair, on my face, on my nipples or in my pussy" and even gets some golden showers from Mr. Lloyd Kaufman himself. 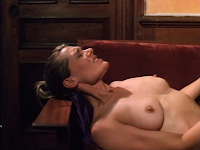 Firmer has plenty of other naked flesh running around from men and women "Now where are them big breasted women at" and in one of the greatest moments we have a naked man with a nub-penis running through Time Square NYC. "Do you love my nub penis?" We also have close-up's on a hermaphrodites genitals. Ron Jeremy also appears as a child molester who has been severely mutilated and locked in a cage. Jeremy lost his eyes, lips and even his giant rocket and the makeup is somewhat reminiscent of that 80's Linda Blair flick Grotesque. Terror Firmer also comes complete with numerous exploding heads, exploding breasts "Thanks for the mamories", exploding Lloyd Kaufman's, Achy-breaky skulls (complete with a sharp broken bong being smashed into a mans head and his brains are pulled out and dropped into a frying pan full of cocaine), Bong water is also poured into the victims anus. Troma fans will be happy to know that the Penis Monster also appears in the movie. Then we get some penis wounds (complete with feminist rantings and stretched out genitals), hand dismemberment, leg dismemberment's and decapitations are all on display. We have crucified puppets, gratuitous vomiting, a fetus is ripped from a woman's womb, fingers are chopped off, a escalator eats a fat man (complete with axe hacking), We get car explosions, crazy costumes, eye-violence, stabbings, gun violence, pickle masturbation and countless other perverse ways to die.

Terror Firmer is bound to get a laugh out of anyone who likes extreme cinema and offend the rest of the world at the same time. My only recommendation is that if you have a stick up your ass you do not watch this movie because it will just make it more sore. 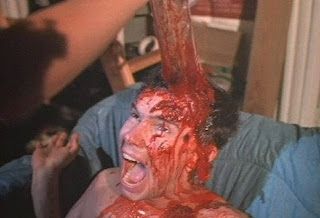