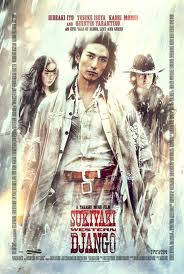 Takashi Miike proves every time that he is a weirdo. This time around Miike tries his hand at a western but just doing a Japanese western isn't enough for Miike. Instead he chooses to do his own version of the Franco Nero, cult classic, spaghetti western, Django.

The movie was shot in Japan with an all Japanese cast with the exception of Quentin Tarantino. As if this isn't weird enough Takashi Miike chooses to shoot the film in English instead of dubbing over it later. The obvious language problem amongst the Japanese cast just adds to the bizarre tone that Sukiyaki Western Django gives off. Similar to the way that dubbing in Italian horror of the 70's and 80's added a sureal vibe that doesn't exist in the subtitled versions.

Sukiyaki plays more like a prequel to Django then a remake and Miike's stylish form of film making really takes the film further away then anyone could have imagined.

A mysterious gunslinger comes to town in the search of gold but this time he isn't dragging a coffin (that comes later). He is not so humbly greeted by two rival gangs, the Reds and the Whites. Both gangs are in search of the gold and are constantly at war. When our gunslinger doesn't choose sides the odds are stacked against him and we get a total shoot-em-up blood bath. We get a new version of the oh so memorable Gatling gun massacre which really doesn't live up to the Italian original. We get lingerie wearing Asian prostitute (unfortunately no nudity), plenty of gun-fu, some samurai action, crossbow-fu, rape, and a bad-ass bitch who pisses while standing up. holes are blown through stomachs, gang members are blown to shit with dynamite, we get some split skulls with swords, and a man is implaled with a giant crucifix. The best part is that its all done with bright red gore.

Check it out for a fast paced, action packed, mindless good time with bright colors and some very stylized murder scenes. Some call it stupid, some call it art, but I call it fun. 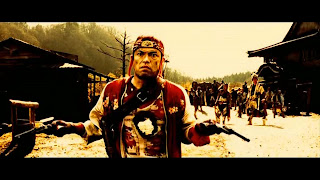