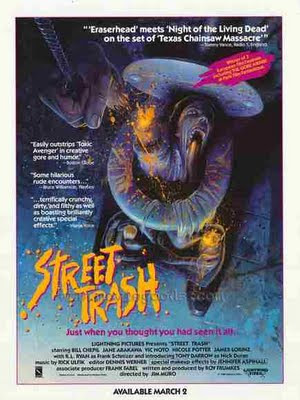 If you were to ask me to define the 80's splatter genre the first films that would come to mind would be Bad Taste and Street Trash. This movie has a level of camp that makes it impossible to take the movie serious at all, nor does it want you to but on the other hand they took the special effect very seriously. Not in the realistic sense that movies like Maniac (1980) went for because the blood spattered mess that this one leaves behind is some of the brightest colors ever.

I always said that the perfect double feature would be Street Trash and C.H.U.D. because both films are filled to the brim with filthy, dirty bums and they are both horror flicks. I suppose now that Hobo With A Shotgun has been unleashed upon all of us homelessploitation nuts, we can have a triple feature.

I have always related Street Trash to Troma films. It has that sort of chaotic style running through it that is found in films like The Toxic Avenger and Class Of Nuke Em High. Where Troma uses seemingly thousands of extras to fill the screen and help their films move along at an insane pace Street Trash does the same thing with... well trash. The sets and locations are packed out with trash and garbage and it adds a level of dirtiness that the movie needs to work.

The plot if you can call it that follows a bunch of "Bums" through their daily lives of drinking and... well bumming. They live in a new york city junk yard and when a local liquor store gets a bad batch of "Viper" booze, the bums start melting down. Neon colored blood flows through the streets with every bum-melt-down. Street Trash offers shit-loads of memorable scenes. One consists of a homeless man who is pulled into a toilet. First his hands brake off, then ooze pours from his mouth and out his pant legs. When its all said and done we have a strange looking toilet monster left floating. We also have hand made knives from human bones which are imbeded into the back of rival homeless folk, we get kleptomaniac bums who trash grocery stores, a decapitation, exploding bodies, bum-sex, a homeless gang-bang rape scene, achy-breaky skull smashing, Vietnam flashbacks (complete with explosions), necrophilia, a quick titty scene, a fat pervert who tries to rape his Secretary, and a whole bunch of memorable lines "Fuck you! Give me a bottle of booze... Here's my dollar... Suck my dick!". 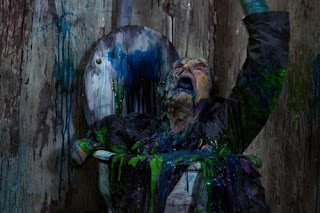