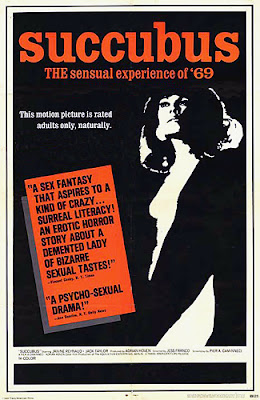 Jesus Franco films have a tendency to be either long, drawn-out, nonsensical, boring, droolers or high entertainment in exploitation art. Sometimes that barrier is very thin in the world of Franco and the viewers mind frame at the time of screening can have much to do with the overall experience. Of course this would stand true with most movies but it seems a bit more so with a Franco film. In other words, you really have to be in the mood for a Franco movie to enjoy it. For instance, Vampyros Lesbos is considered by many to be one of Franco's best but nobody can deny the fact that it can also be a real sleeper if one is not prepared for this sort of thing.

In this sense Succubus is very much like Vampyros. It carries the same dream like vibe and every camera angle is unique with perfectly framed characters, props and local. The soundtrack on Succubus might not be rockin as is that of Vampyros but it definitely adds a level of surreal weirdness that is necessary for this sort of film.

Succubus is a true piece of art and its almost hard to believe that the same man who did movies like Barbed Wire Dolls and Sadomania is capable of creating such class amongst his trash (if that makes any sense).

There isn't much plot to follow on this one. Instead we follow a pretty red-head through strip clubs, art houses, night clubs, weird bondage role playing shows and of course her love life. She is a mystery to all and wanted by women and men alike. The only problem is most can only have her once... As we follow our Succubus through a distinguished Franco camera lens, the bodies of her lovers drop.

Aside from the dreamy. artsy-fartsy stuff Succubus offers up a hippie-delic acid scene (complete with creepy midgets, and a house party on their hands and knees pretending to be horny doggy's). We also get a fair amount of nudity (after all this is a Franco movie). Mr. J&B appears constantly, We get a strip-teasing, Lesbians, whippings, multiple stabbings, achy-breaky skulls (complete with angel statue to the face), Mannequins come to life in one of the creepiest moments in the film but the thing that I found most interesting was certain dialogue. Mainly in scenes where the characters discuss various artists and their first association with them.

Succubus is the perfect movie to watch alone. It's not the type of movie you can recommend to entertain a group of friends with. In that case you would need something like Devils Nightmare with Erika Blanc as a Succubus. Come to think of it the two films would make a pretty good double feature, Succubus would have to play first though. Otherwise there will be some soaring in the audience. 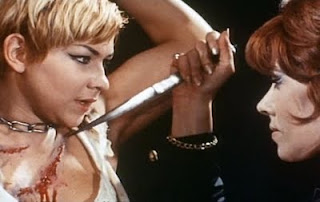