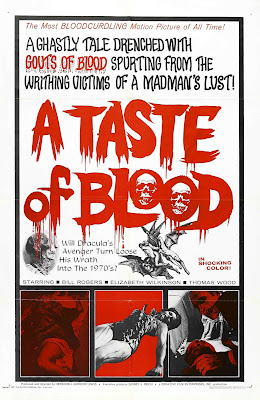 A Taste Of Blood is the most boring out of all the Herschell Gordon Lewis gore flicks. It is also has the most production value out of all of his films and is the longest movie the Godfather Of Gore has ever done. A Taste Of Blood runs at just under two hours where all of H.G. Lewis other stuff stuck at the typical 90 minute mark. 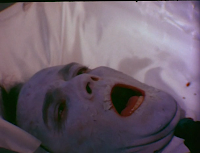 Bill Rogers who plays the priest in the sexploitive Shanty Tramp takes on the role of a vampire named John Stone. Stone is a direct descendant from the late Count Dracula and when a bottle of "Brandy" arrives in the mail from his ancestor, Mr. Stone becomes a murderous blood-sucker. (P.S. it wasn't Brandy in the bottle.) Bill Rogers has a striking resemblance to Hammers Christopher Lee and makes for a pretty good vampire.

Aside from Bill Rogers there is a actress who looks exactly like Miss Shanty Tramp herself but according to imdb.com it is two different actress's. If it is not the same actress then they must be identical twins. The Godfather Of Gore shows up himself in a cameo as the captain of a ship with a big mustache and the worst fake British accent of all time.

A Taste Of Blood runs to long with not enough of the H.G. Lewis gore that we all know and love so much. Sure we get multiple steaks through the heart and a few blood drinking moments but the film is as tame as can be. The best qualities of the film is the crusty makeup that Bill Rogers wears when he transforms into the vampire. The blue lighting also adds a element of weirdness. On the other hand Lewis seemed to have no concept of night for day and vice verso shots on this one. The day and night continuity in A Taste Of Blood is even worse then that of Gore Gore Girls.

Only worth a watch for die-hard Herschell Gordon Lewis fans. The rest of the world should skip it. It runs to long and doesn't offer enough blood and guts. 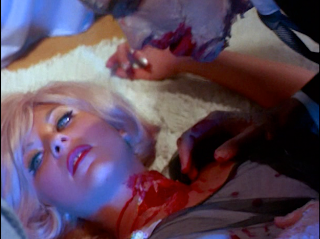